What would it look like if we could see sound waves? This SeeSV-S205 prototype camera captures and visualises sounds!

The SeeSV-S205 is a prototype camera that does something incredible – it visualises sound waves and combines it with photography, allowing you to see sound!

Confused? See it in action:

The camera, developed by Suk-Hyung Bae from KAIST, is intended for research and practical applications – it will probably be a long time before this technology will appear in consumer products.

So, how does it work? Take a look at the camera again: 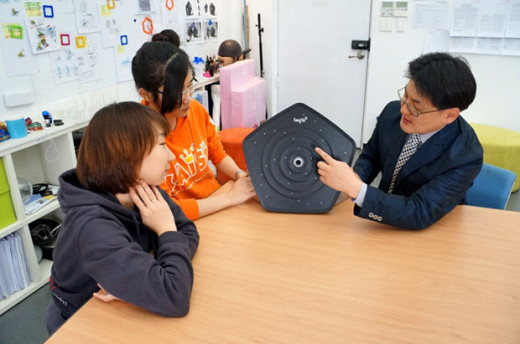 In the centre is a standard high definition camera, and surrounding it is a set of 30 microphones arranged in a spiral pattern. By analysing the sound recorded by these microphones and overlaying the results on top of the standard video footage, the camera can show us where sounds originate and how loud they are. Practical applications include automotive repairs – mechanics will be able to pinpoint sounds and vibrations, allowing them to find problems faster:

As mentioned, this tech probably won’t show up in next year’s DSLRs, but it’s still very cool to know that it exists! As a bonus fact, the camera’s industrial design has earned it a prestigious Red Dot award.

Read more on KAIST and PetaPixel.