After taking a look at Canon’s new PowerShot G1 X at CES 2012, we had the opportunity to handle their new EOS-1D X flagship DSLR. Here’s a short video introduction, featuring some 12 frames per second bursts at the end:

On paper, the 1D X seems like a breakthrough camera, but what is it like in real life? Our first impression was that the new DSLR is on the rather heavy side. Although the official weight of the camera has not yet been disclosed, it’s definitely heavier than any previous EOS-1 DSLR. However, the grip and ergonomics more than make up for the weight, and most pros will feel comfortable with the 1D X. As for the speed, barely touching the shutter release would fire off 5 or 6 stills, and the shutter sound was not disturbingly loud, although you won’t want to be using this to shoot in noise sensitive locations. The new viewfinder is large and bright, and will be a treat for any photographer used to cropped DSLRs. We weren’t able to test the image quality or focussing accuracy at the show, but after the problems Canon has had with some previous cameras, we’re pretty confident that they will have resolved any issues. 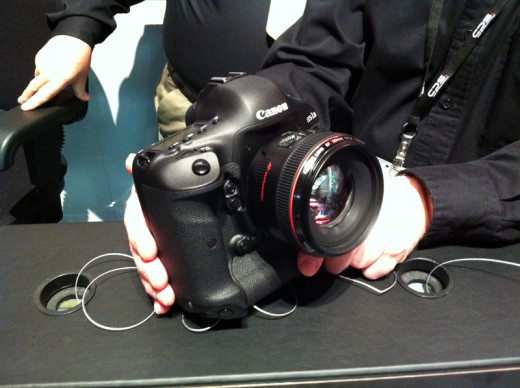 Overall, the camera feels great, and should live up to its high expectations when it arrives in March 2012.

An Opportunity to Exhibit Your Photographs
Wedding Photography By Frank Nash
Vote For The Photo Of The Month: June "Autumn" 2015
Interview with the "My Orms Story" Photobook Illustrator, Shân Fischer

The Drakensburg rising majestically from the South

The sheer scale of the Zeitz Museum of Contemporar

Have you ever seen anything as gorgeous as these w

The beauty of this moment between a mother leopard

Just a little reminder from @sheisvisual that toge

@her_studio__ is right, that first cup of the day

We're pretty sure all parents can agree that getti

This moody shot of Lion's Head by @pieterbucklel86