In photos: ‘Buikspraak/Gutspeak’ by Dominique Edwards showing at Commune.1. Don’t miss this one!

“Buikspraak/Gutspeak” by Dominique Edwards, is currently on show at Commune.1 in Wale Street, Cape Town. This afternoon, we had the pleasure of viewing the works, and if you are based in Cape Town, we urge you to do the same! This is one show that’s not to miss. 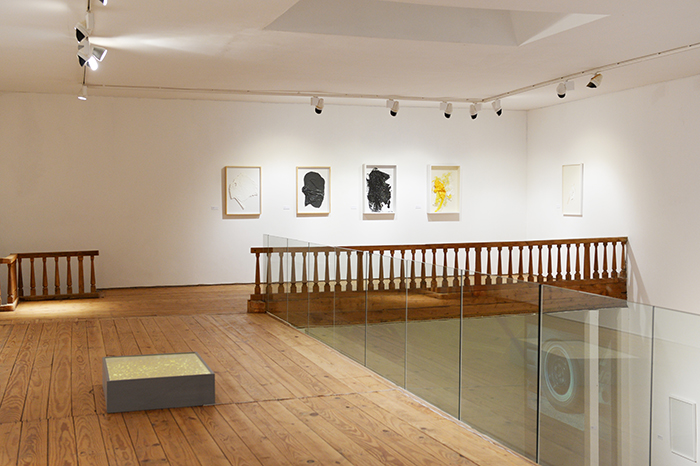 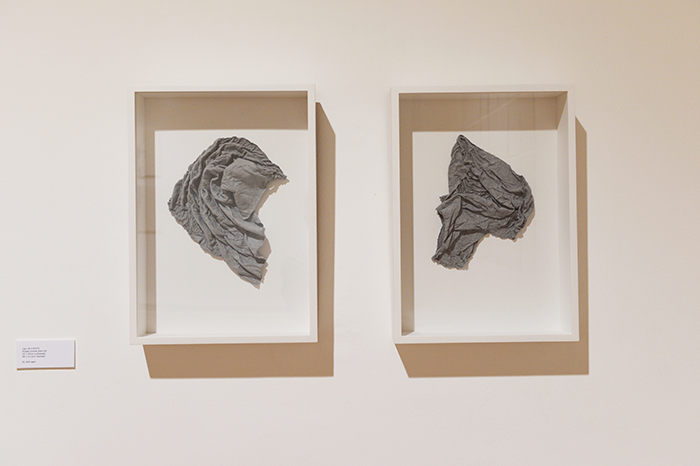 Commune.1 presents an exciting new body of work by Dominique Edwards that has been two years in the making. The exhibition will span the entire gallery space and is executed using a range of both traditional and unconventional materials including ink on paper, photography, video projection, packing tape, found objects, hand-made paper, automated dowsing rods, glue, mops, plastic and more.

Buikspraak, translated literally into English as ‘gutspeak’ or, by definition, as ventriloquism, is used in both literary and colloquial contexts to question the sincerity behind the voice. Edwards explores the visceral signals (e.g. gut feelings) that bypass the rational and ideologically infused language centres of the brain and point instead to a phenomenology of presence, complicated by questions of agenda and authenticity: what is the gut, who is the puppeteer, when it speaks, who do I hear – how many voices inhabit this frilly place? These questions combine with a strong visual evocation of density, matter and space to speak of the processes of artistic creation – how the gut informs the marks made and the materials used; and to questions about being in the world, knowing what we know and our entanglement with the matter and environment. 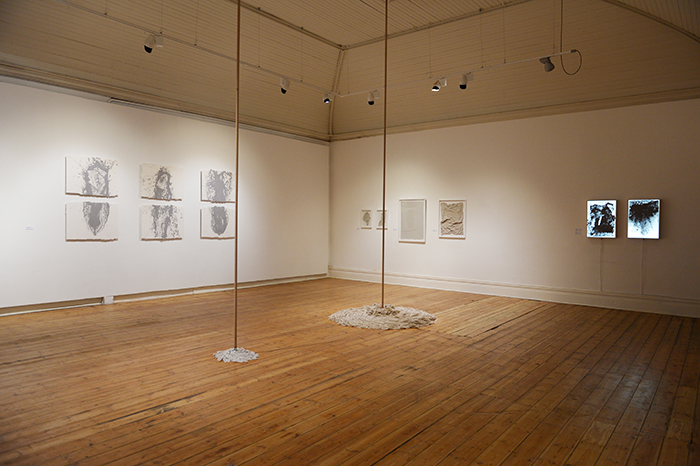 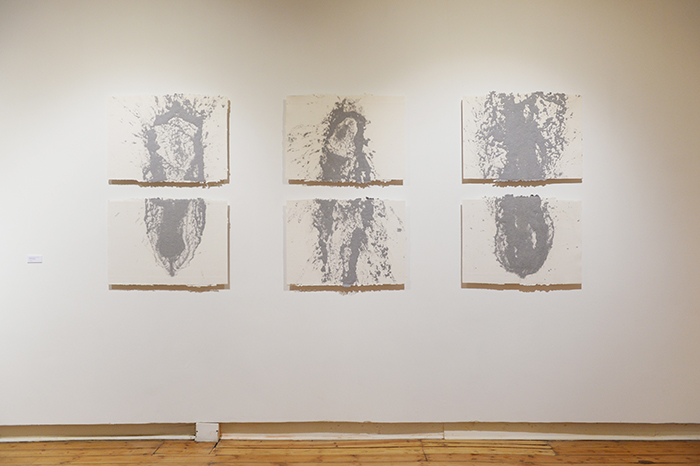 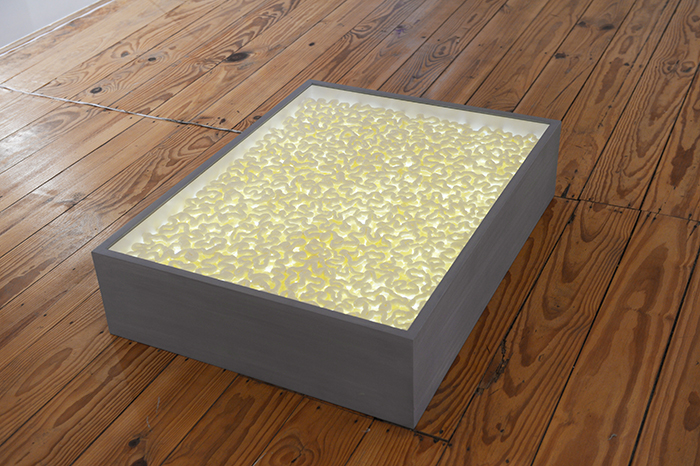 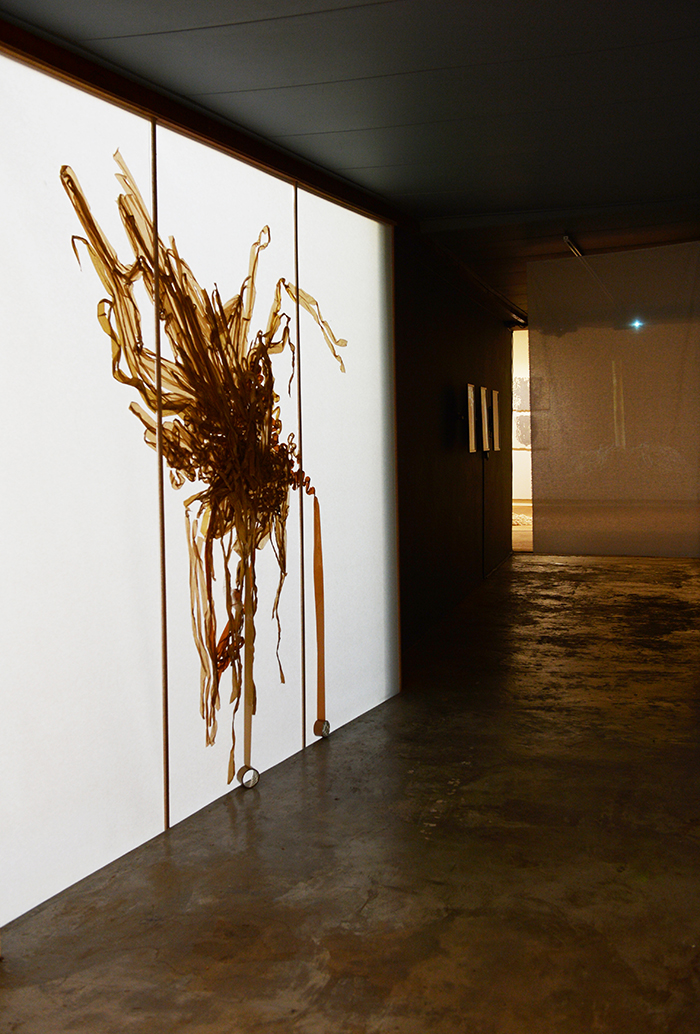 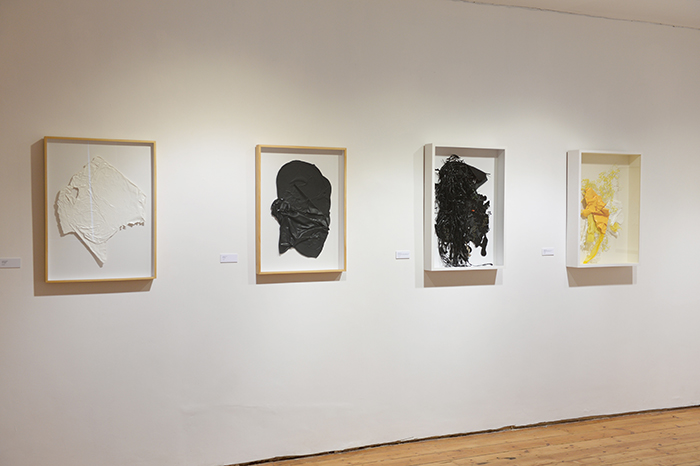 In contrast to these wider ontological concerns, there is a personal and localised enquiry into notions of place. For Edwards, place is an ongoing theme that draws on familial history in Barkly West, Kimberley, and on Afrikaner heritage and language. It is the gut level of language – inscribed as poetic imagery – and its connections to place that encourage a form of embodied cognition. Thus, Edwards looks to traversing the spaces between the two ‘languages’ – the gut brain and the thinking brain – both of which are ‘of the body’ yet which respond to different sensory inputs and have different feedback mechanisms.

This work can also be read in relation to current research on neural activity in the gut and the microbiome; to themes of consciousness  alternative intelligence, posthumanism and deep ecology. 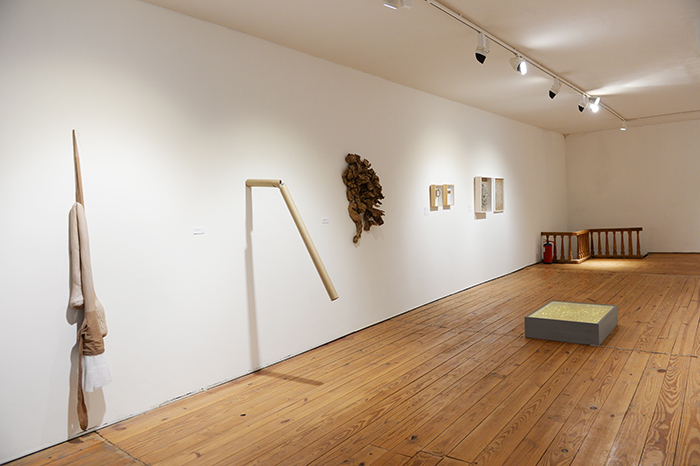 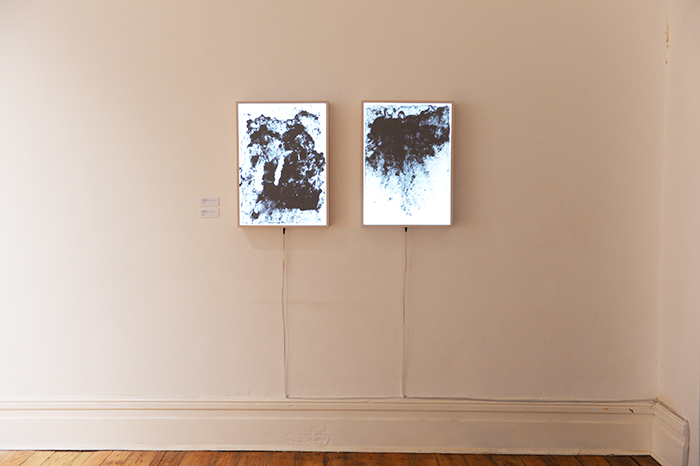 Dominique Edwards (b.1980, Barkly West) holds a Masters in Fine Art from the Michaelis School of Fine Art (2012), a post-graduate certificate in education from the University of Cape Town (2003) and a Bachelor in Fine Art from the University of Stellenbosch (2002). Edwards has taught and continues to work with a broad spectrum of students at various FET and tertiary institutions in Cape Town. This is her second solo show at Commune.1, the first entitled, ‘The Distance Between Us’ was held in 2012. She has participated in numerous group exhibitions: ‘Summer Salon’ (2013) Commune.1; ‘Terminal’, curated by Adrienne van Eeden Wharton, Jean Brundrit & Svea Josephy, Gordon Institute for Performing and Creative Art’s programme LAND and exhibited on street poles throughout Cape Town City Bowl; ‘Salvo’ in 2012 at Commune.1, ‘Heimlich Manoeuvres’ (2011) and ‘This is Not Final’ (2010) both at Michaelis Gallery and The Substation (WITS, Johannesburg).