The correct way of testing a lens would be to download a test chart from the net and shoot multiple shots of it at a variety of f-stops, under the exact same lighting conditions, using a cable release – doing your best to be as pedantic as possible about the procedure. There is a place for these sorts of tests – if you really care to analyse every intersecting line on a test sheet for sharpness, or if you have a lot of time on your hands.

I prefer getting out of the office to shoot something more interesting, and, if my technique is spot-on, I will certainly be able to tell if the lens is sharp.

There’s no point in blasting your savings on a pricey lens, only to be let down by a fault in your technique. I try to keep in mind that life is about balance, and no kit in the world is going to sway that balance unless you have some idea of what you’re doing.

With the above in mind, I recently had the opportunity to test the all-new Tamron SP 70-200mm F2.8 Di VC USD lens – a well-priced, top-specification telephoto zoom lens. I was expecting good things from this lens, especially as the reports on the net have been very favourable. I had the pleasure of hooking up with top SA Freestyle Motocross (FMX) rider Dallan Goldman at his Jungle Rush riding compound just past Fourways in Johannesburg. Steering away from the obligatory high-flying trick shots, I tried to keep it simple and shoot Dallan as he exited from a flat bank he uses to turn and set up for a jump. 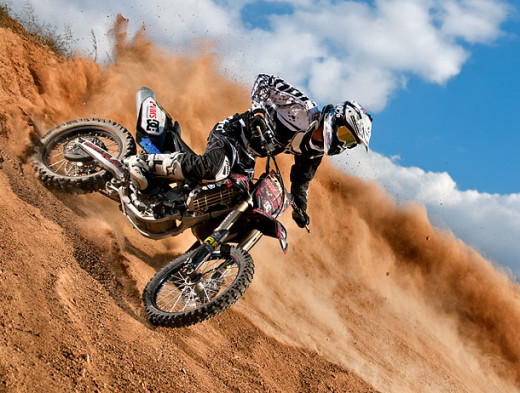 Setting my faithful Nikon D3x on 9-point Dynamic Autofocus, I tracked Dallan twenty times and captured each shot as he exited the bank. Autofocus was exact, fast and reliable – not missing a beat on any of the twenty shots captured. Pretty impressive. In addition, on another FMX shoot some days later (see image of Scott in the berm further down), the results were exactly the same – sterling. It’s not often that every shot is sharp when focus tracking – even if your technique is spot-on. 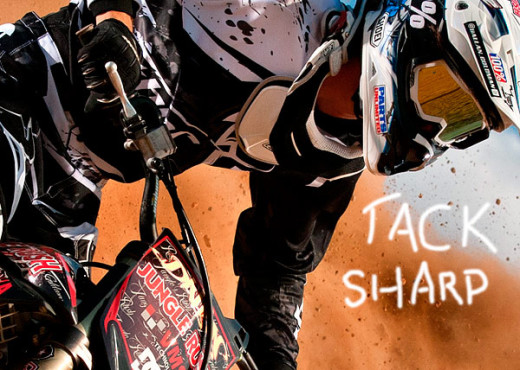 Most top lenses claim to be weather sealed. This term refers to the ability of a lens to be dust and moisture resistant. I still have to find a lens that is as resistant as I’d like it to be, as they all act up at some stage of exposure to the elements. In fairness to the manufacturers though, they do advertise their products as weather resistant, not weatherproof, and certainly can take a fair amount of abuse and exposure to the elements before they act up.

In order to expose this Tamron to some serious dust, I purposely didn’t clean it after the first shoot at the park and went on to shoot a second, even more dust-filled shot of Scott Billett a week later. In the shot of Scott powering through the berm, you need to appreciate the power his back wheel is putting into his exit and the 20 metre dust storm that engulfs me as result. You can imagine the amount of dust generated, 25 shots later. 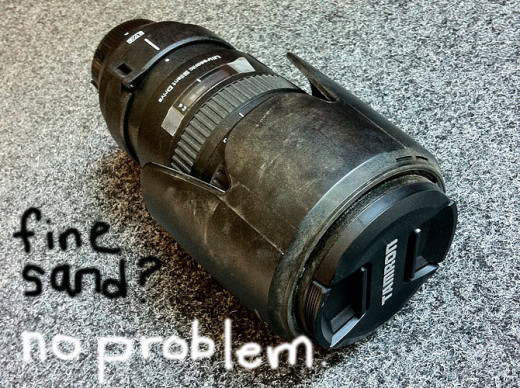 Can handle a bit of sand… Image: Ben Bergh.

Not fazed by this obvious lack of maltreatment, the Tamron simply kept doing its job, not once struggling or asking for mercy.

I’ve since used the lens on a portrait shoot for a client and was again impressed with its rapid autofocus and resultant tack sharp images. It seems the game is changing a bit. There now are worthy competitors to the big name brands. Something that is healthy for all involved, especially the consumer. 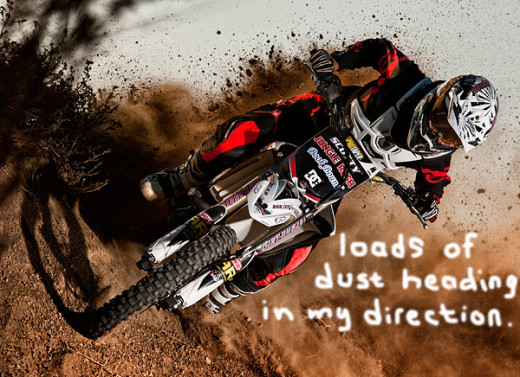 As usual, my Elinchrom Rangers with S-heads and PocketWizard TT1 and TT5 radio slaves allowed high speed sync at 2500th/sec. Fast enough to freeze the action and bring punch to the background.

I’d like to say a BIG thanks to Dallan Goldman and Scotty Billett for making themselves and their skills available for these two shoots and to Singer Photographic for the test lens.

If you want to get hold of Dallan to go ride the Jungle Rush Park or book him for FMX shows, you can contact him on his website.

Review and images originally appeared on Ben Bergh’s website, and are reposted with permission.