An in-depth look at the similarities and differences in image quality between Canon’s two mid-range DSLRs, the 5D Mark II and 7D.

Canon currently offer two mid-range camera bodies in the form of the Canon 7D and the Canon 5D Mk II. Both cameras have been on the market for a while, with the 5Dmk2 being the older camera. The Canon 5D Mk III is about to arrive on the market as I am writing this post, but it comes in at a substantially higher price than its predecessor and is positioned a little higher in the product line, so at this point in time it is not a direct replacement for the 5Dmk2, which will for now continue to be sold alongside the 5Dmk3.

Although the Canon 5Dmk2 and the Canon 7D look quite similar, the two bodies are quite different in many ways, and none more so than in their sensor characteristics. The 7D is an APS-C sensor camera, with 18mp of resolution. The 5Dmk2 has a full-frame sensor, which is larger than that of the 7D, with 21mp resolution. There is more to understanding sensor characteristics than just megapixels though, as these two cameras are only 3mp apart when it comes to resolution.

It should be clear from following this explanation that the photosites or pixels on the 7D sensor are much smaller than those of the 5D sensor. Looked at another way, if you took the larger pixels of the 5Dmk2, and divided up a 7D-sized sensor using these pixels, you would only get 8 million of them to fit on it (which would equate to the 30D sensor of a few years ago). When comparing the full frame 5Dmk2 image with that of the APS-C sensor of the 7D, bear in mind that the sensor cannot change the focal length of the lens. Those in the market for a mid-range Canon dslr body often end up having to choose between these two camera bodies, and as such it is useful to be able to see and compare images taken with the two cameras, side by side.

With the help of Chris Frylink and his 7D, we set up the two cameras to shoot some comparative images.

We used a Canon EF 70-200 f/2.8L IS II lens, mounted on a tripod. Only the camera body was changed each time. No sharpening was applied other than a default setting of 25 in Adobe Camera Raw. Raw images opened in Photoshop CS5, downsized and saved using File Save For Web and Devices at 190kb file size. Images were taken with the lens set at 115mm focal length, and from the exact same position and lens angle. 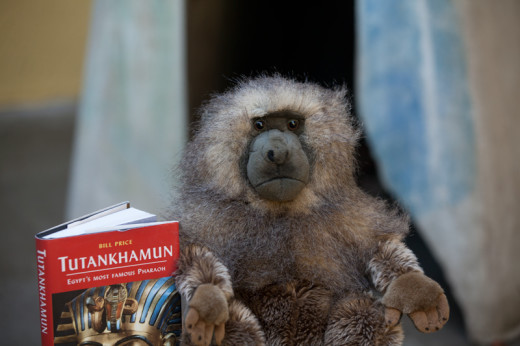 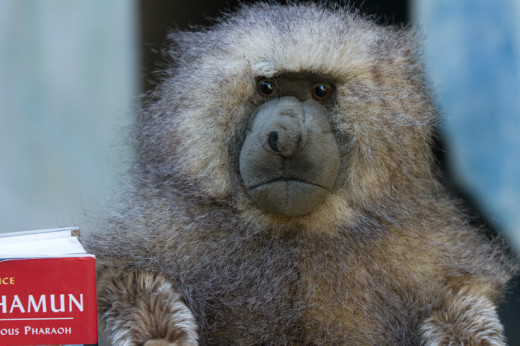 The difference in how much of the image the two different cameras record can be clearly seen above. There is no cropping with the above images. There is a great difference between the size of the subject in the two images. As these images are taken at iso 400, and downsized to 800×533 for web use, it is difficult to be able to evaluate any quality differences at this point.

For the next pair of images, we decided to make the subject about the same size. In other words, if you were not able to move closer with the 5Dmk2 in order to get the baboon the same size as in the 7D frame, or were limited to 115mm focal length, then your option would be crop until the subject size was the same. 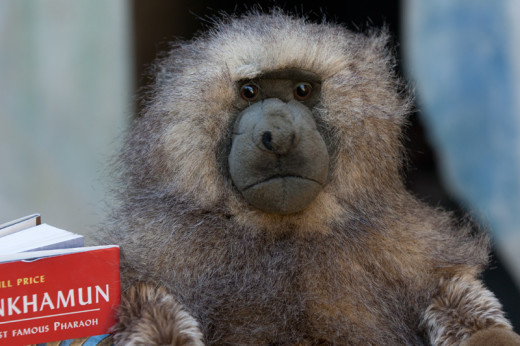 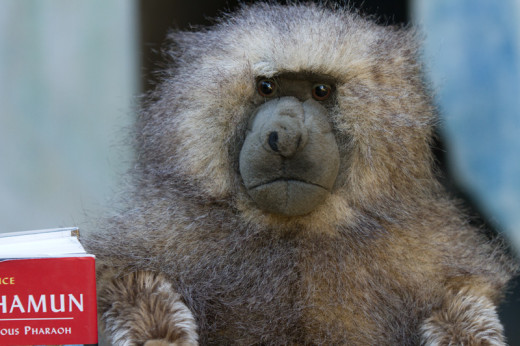 We cropped the 5Dmk2 image until the baboon was roughly the same size as in the 7D image. This left the 5Dmk2 image with resolution of 8.2mp, compared to the 7D image at 18mp. When viewing the two original images on my screen there is still not a whole lot of quality difference between the two at these display sizes. If 8mp is enough for your requirements, then it is feasible to crop the 5dmk2 file heavily to get the subject to a bigger size. In case you noticed, we did have a slight wind problem with our furry baboon model subject, and had to reposition between the two camera body shoots. This also explains the baboons angry expression in the second image. It did not affect the background or noise levels at all. To really compare quality with the subject size equalized, we needed to crop in heavily on the files from both cameras.

As the 5Dmk2 has more pixels, it can be cropped more heavily in order to get the subject the same size. For the next pair of images we did just that. We cropped so that there would be both high-contrast detail areas in the frame, (around the baboons eye, and fur) as well as distant, out-of-focus low contrast background areas to check for noise. 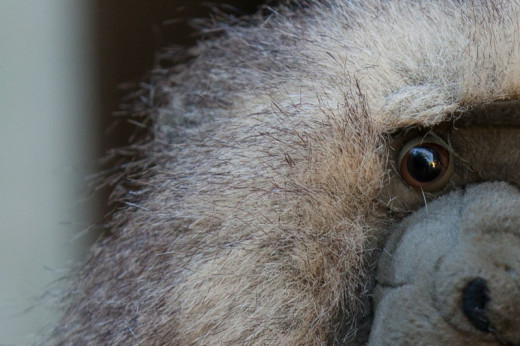 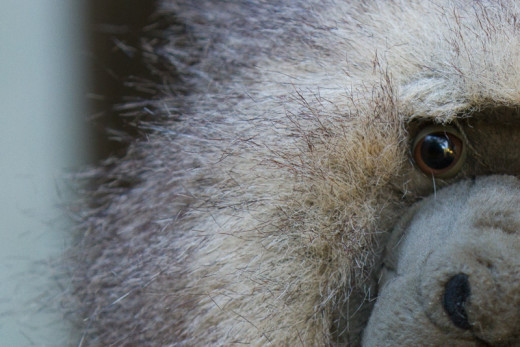 Surprizingly, the 5Dmk2 image shows about the same noise level, even though it is cropped to 1mp. It is still sharper visibly than the 7D image, and were one to sharpen the 7D image, it should be borne in mind that doing so would increase the visibility of the noise in the 7D file.

The 5Dmk2 image shows superior fine detail contrast in these two comparisons.
According to some sources the 7D has a strong anti-aliasing filter, which is likely one reason why it does not produce raw images that appear quite as sharp or fine-detail contrasted as the 5Dmk2.

It is very easy to sharpen the 7D file in processing but it would need to be done with care to avoid sharpening background areas were noise would be made more prominent by sharpening. This fits in with my own experience with the 7D files, in that they needed a little more careful processing to show at their best. I was surprized at just how well the 5Dmk2 image held up in this crop. At the same time, the cropped 7D file has twice the resolution so if necessary, could be printed at twice the size of the 5Dmk2 file.

What follows are similar crops, from the same cameras, lens and subject, but new images taken at iso 800. 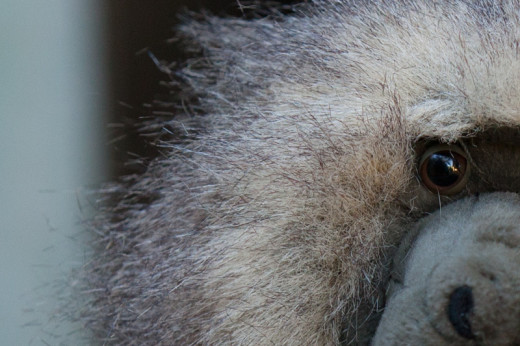 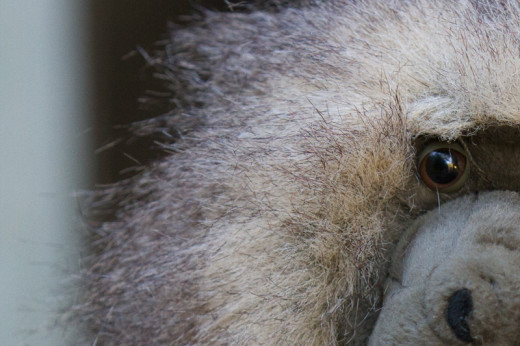 At iso 800, the 5Dmk2 noise becomes slightly more visible, specially at that very heavy crop. Again, there is not that much difference although the noise in the 7D image has a smoother look to it with less blotching visible. This comparison shows that in good light, and at ISO 400, it is possible to crop the 5Dmk2 image until it matches the “subject size” of the same image taken on the 7D, and that there is not a great deal of difference in the image quality of the two cameras using this method. The 5Dmk2 image appears sharper out of the camera. At extreme crop sizes, the higher resolution of the subject-size equalized frame of the 7D gives it an advantage.

After extensive use of both of these camera bodies, my own findings in actual shooting conditions pretty much supported what comparing these images show. Importantly, when one does not crop the 5Dmk2 image as heavily as we have here, it produced even better results.

I will be posting a second image quality comparison between these two camera bodies shortly, where focal length was changed in order to equalize subject size. In other words, comparing 5Dmk2 images taken at 160mm with 7D image taken at 100mm.

We did not calibrate the two camera bodies to the camera lens. Whilst there were no clouds in the sky, and we shot as quickly as possible between changing bodies, there might be slight changes in available light.

For my purposes, in raw format, I felt completely happy that the pictures were sharp enough and that both lens and camera combinations were working properly.
With proper sharpening applied, there would be lots more detail showing on the subject.