The 1D X’s 1.1.1 update is all about unlocking autofocus improvements. In response to requests from users of the professional DSLR, the firmware update enables AF point illumination during AI Servo autofocus, and also allows cross-type AF at f/8.

“To support the needs of wedding, portrait, sports, wildlife, and theatrical performance photographers working in low light, AF points in the EOS-1D X’s viewfinder can now be illuminated in red with a half-press of the shutter in AI Servo AF mode, for easy viewing of the selected point. Illumination is intermittent, not continuous, and does not interfere with metering accuracy. Two brightness levels are available for the most suitable level of illumination in dark settings and illumination is fully compatible with the range of focus points and focus zone selection options on the EOS-1D X.”

Telephoto lens and extender users will also be pleased to know that cross-type autofocus is now supported at maximum apertures up to f/8.

“Ideal for wildlife photographers and others who often use Canon EF super-telephoto lenses with extenders, the new firmware allows cross-type autofocusing with the center AF point when the maximum aperture becomes as small as f/8. This new feature greatly expands the range of EF lens/extender combinations that support autofocus when used with the EOS-1D X.”

Canon has also published a table of lenses and extender combinations supporting AF with the 1.1.1 update: 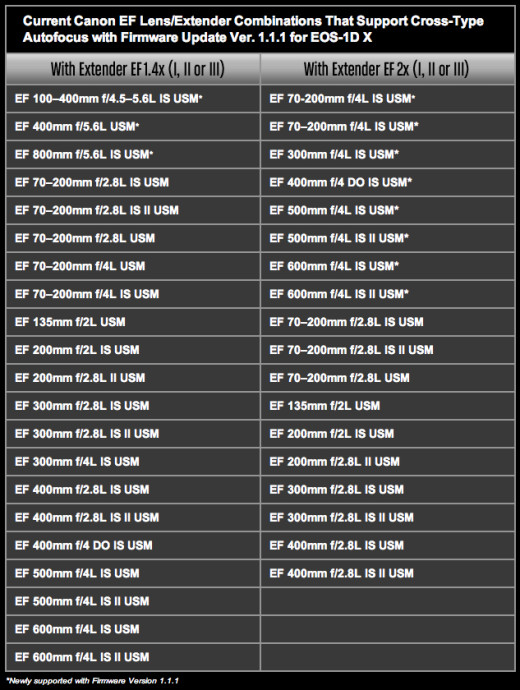 For detailed information about the 1D X 1.1.1 update, visit the Canon microsite.

Canon also announced an update for the Canon 5D Mark III’s firmware, scheduled for release in April next year.

“In response to requests from professionals working in the fields of cinema and television production, the firmware update enables the use of uncompressed HDMI Output support, making possible more efficient video editing and monitoring procedures. Additionally, the upgrade supports the advanced needs of photographers through improved AF performance when capturing still images.”

The update will unlock “the recording of high-definition uncompressed video data (YCbCr 4:2:2, 8 bit) from the EOS 5D Mark III to an external recorder via the camera’s HDMI terminal.” Additionally, the same cross-type AF at f/8 as the 1D X will make it’s way to the 5D Mark III.

This week in our digital studio we are joined in c

"No, I did not tell them to pose like a groom with