Inspiration: “Incurious” Portraits of a Sheep series by Justin Dingwall. The project explores our relation to that which is different, exploring how we as human beings function in society.

We take a look at “Incurious” a portrait series by Justin Dingwall, a successful Johannesburg-based commercial photographer, as well as a contemporary artist. We asked Justin to tell us a bit more about how “Incurious” Portraits of a Sheep came about, this is what he said:

In 2006 my portrait work was being exhibited at an independent gallery in Pretoria. A client saw my portraits and loved my work. So he approached me to photograph his sheep in the same style as my portrait work. After photographing a series of sheep portraits in a field I realised there was fair bit more that could be done with this topic. I started by photographing sheep in peoples house’s on farms with a medium format camera on film, from here we just started getting crazier.

As the project grew, so did the ideas and locations. It started to become physically impossible to transport the sheep to certain locations, from here we swooped over from film to digital cameras. So we started photographing the location then replicated the location in studio and photographed the sheep on a set, then photoshopped the images together. It took a 4 years to complete the series. 50% of the images are real and the other 50% are photoshopped. 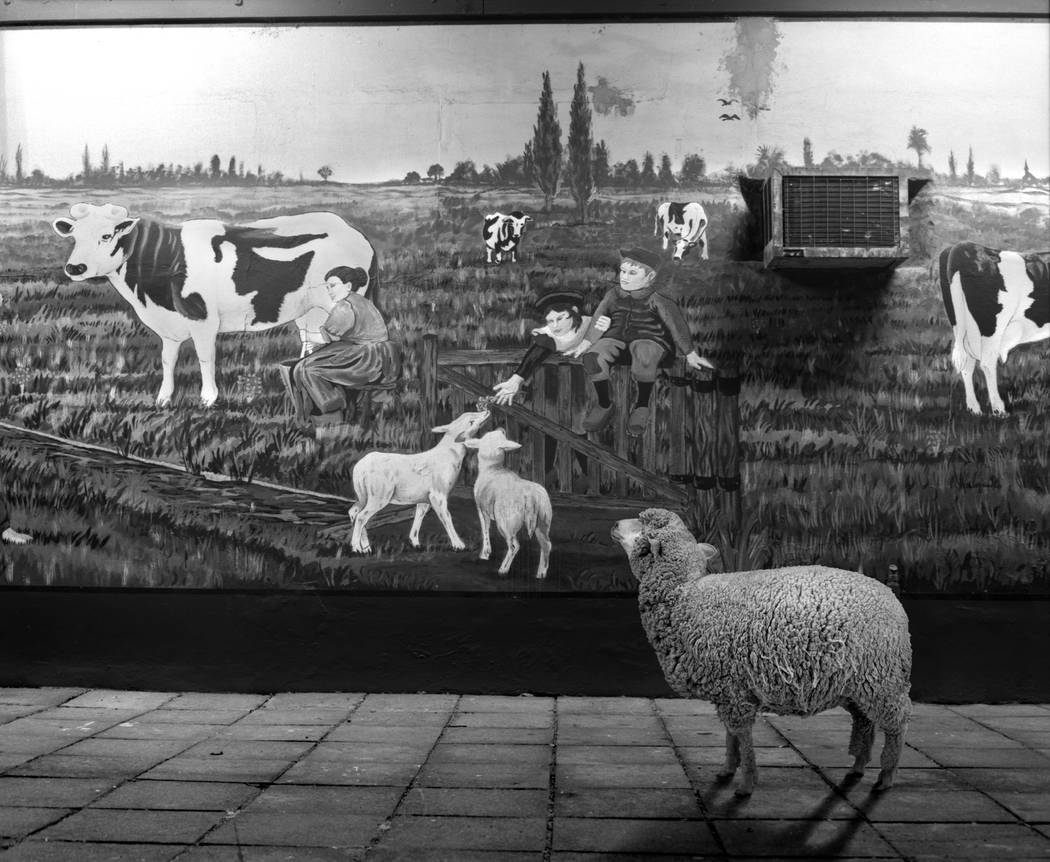 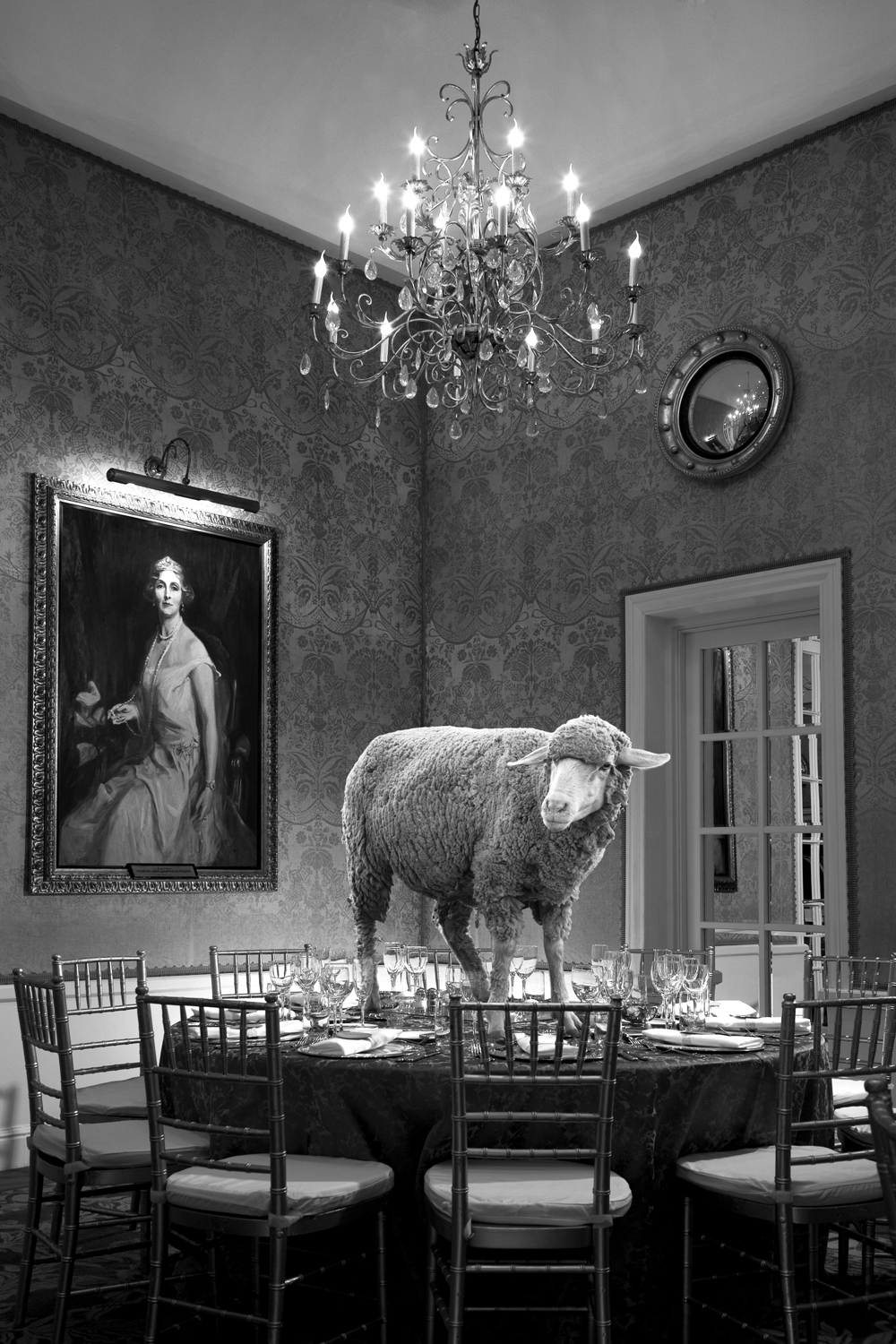 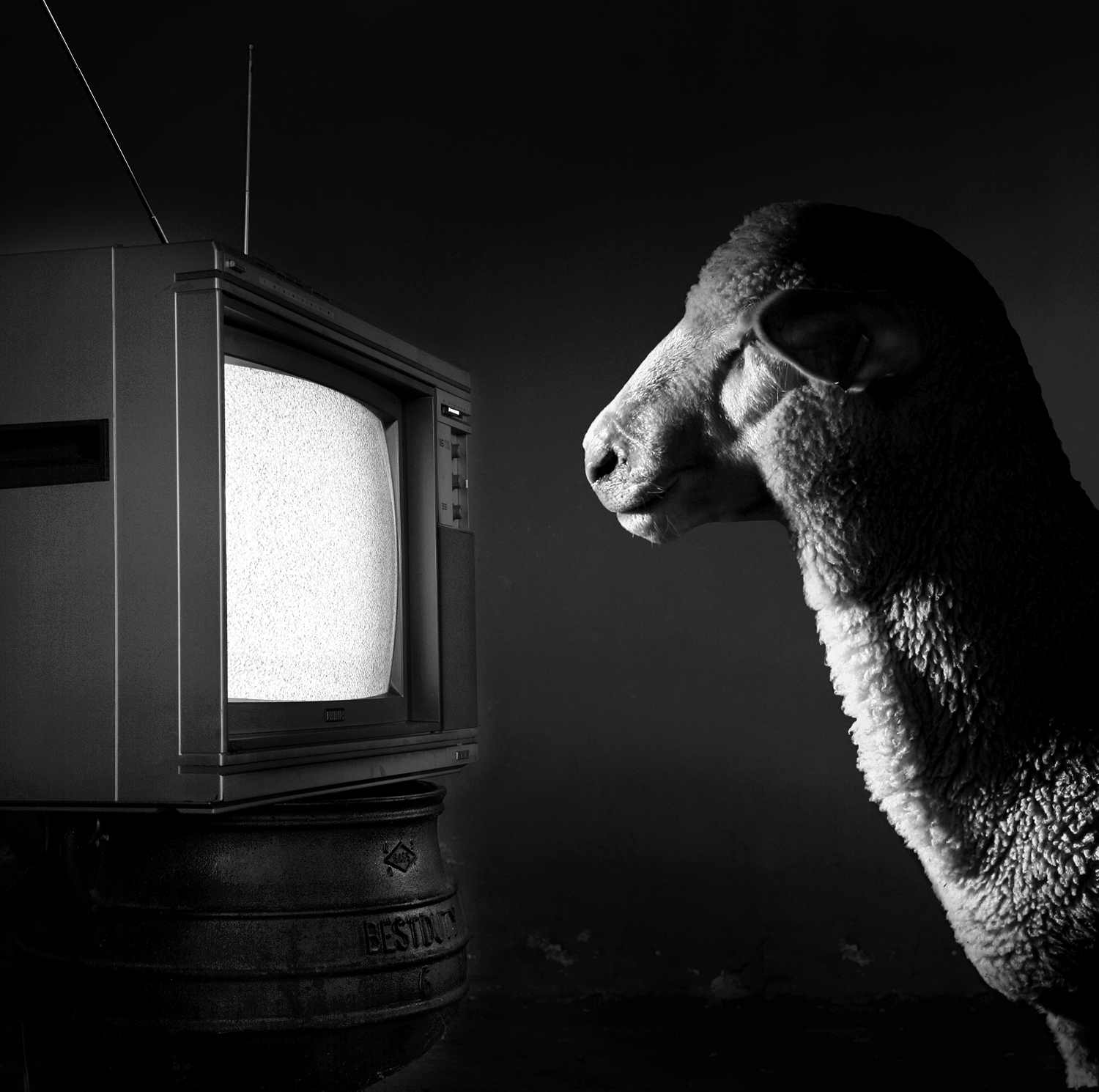 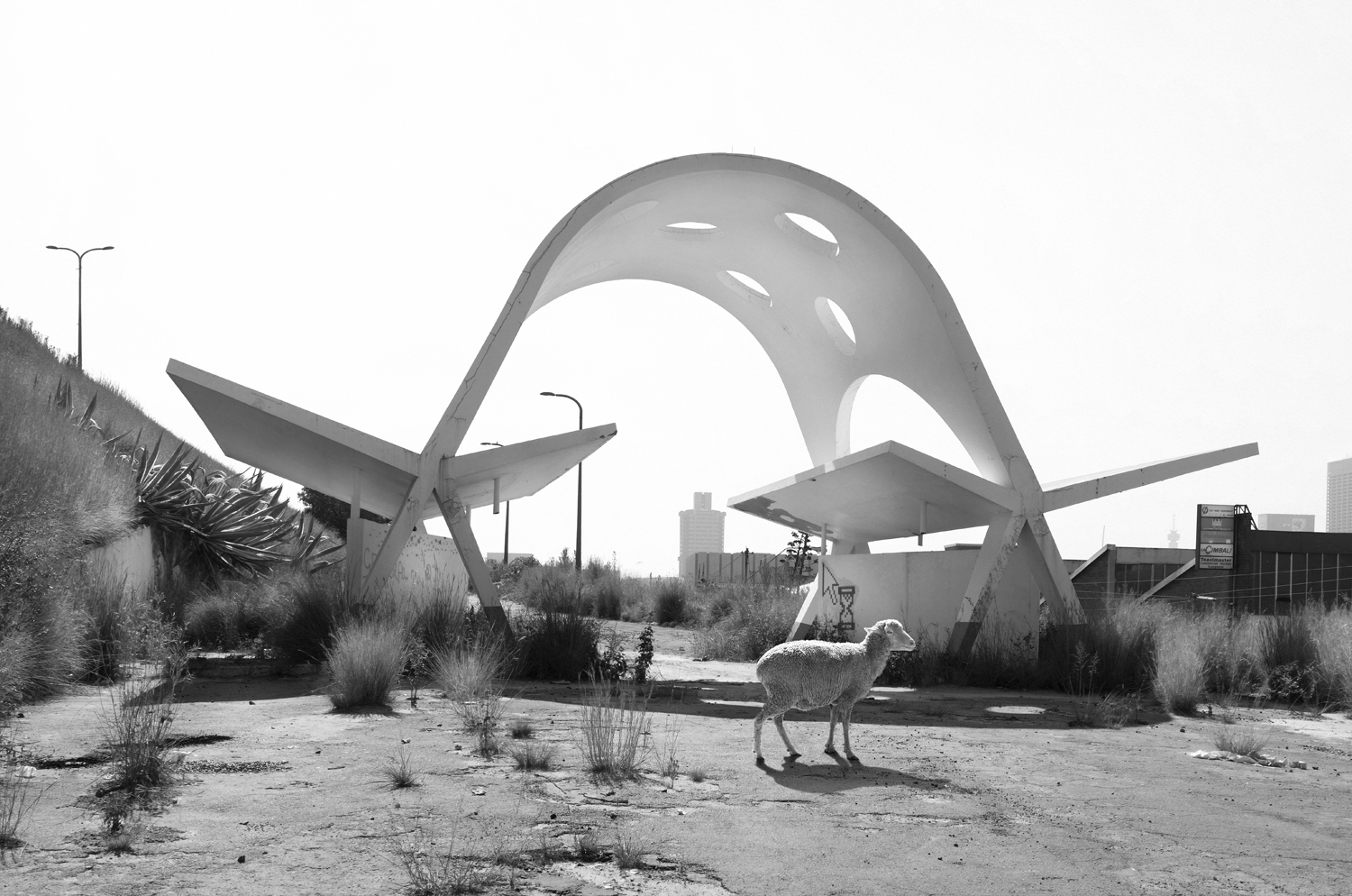 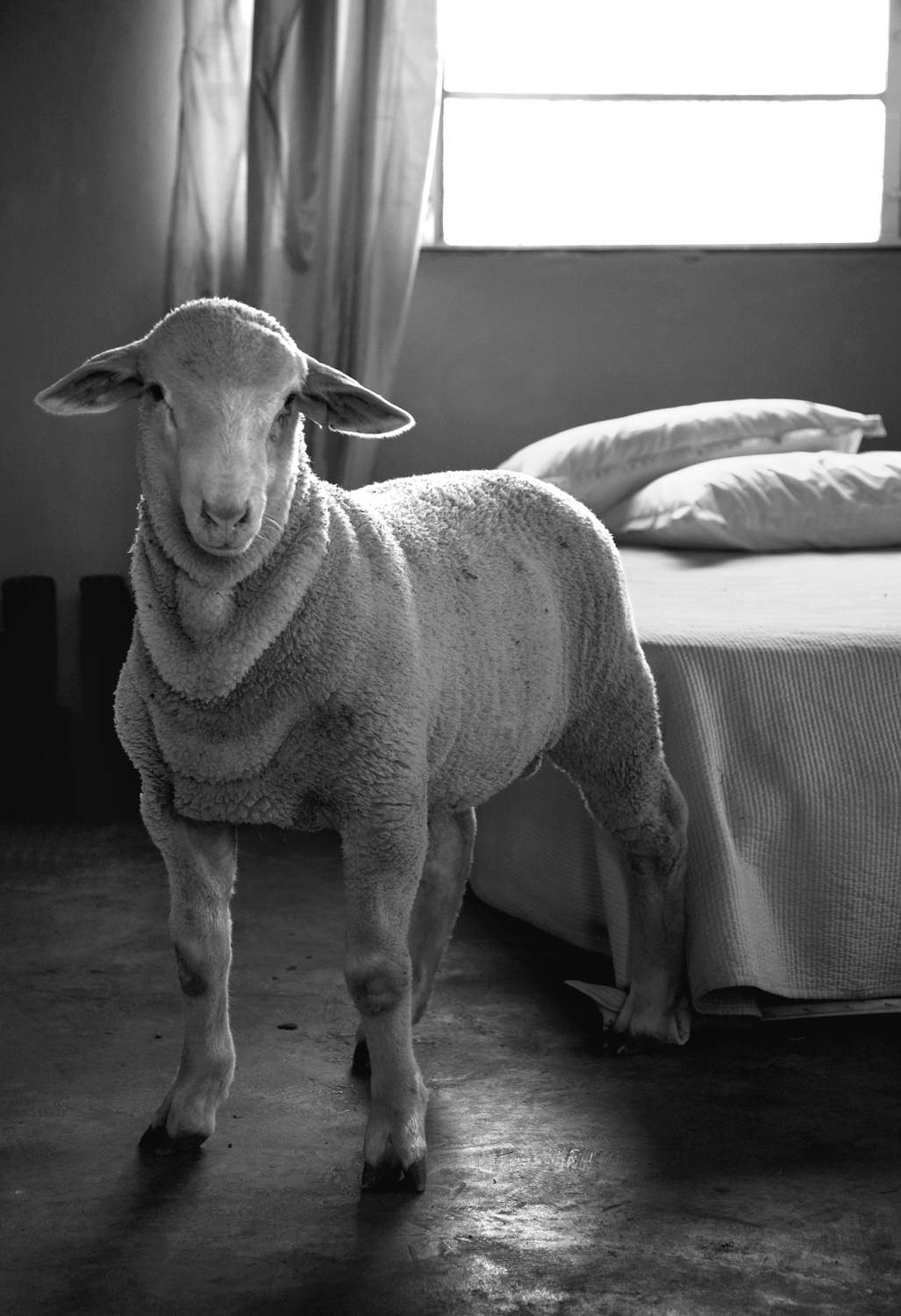 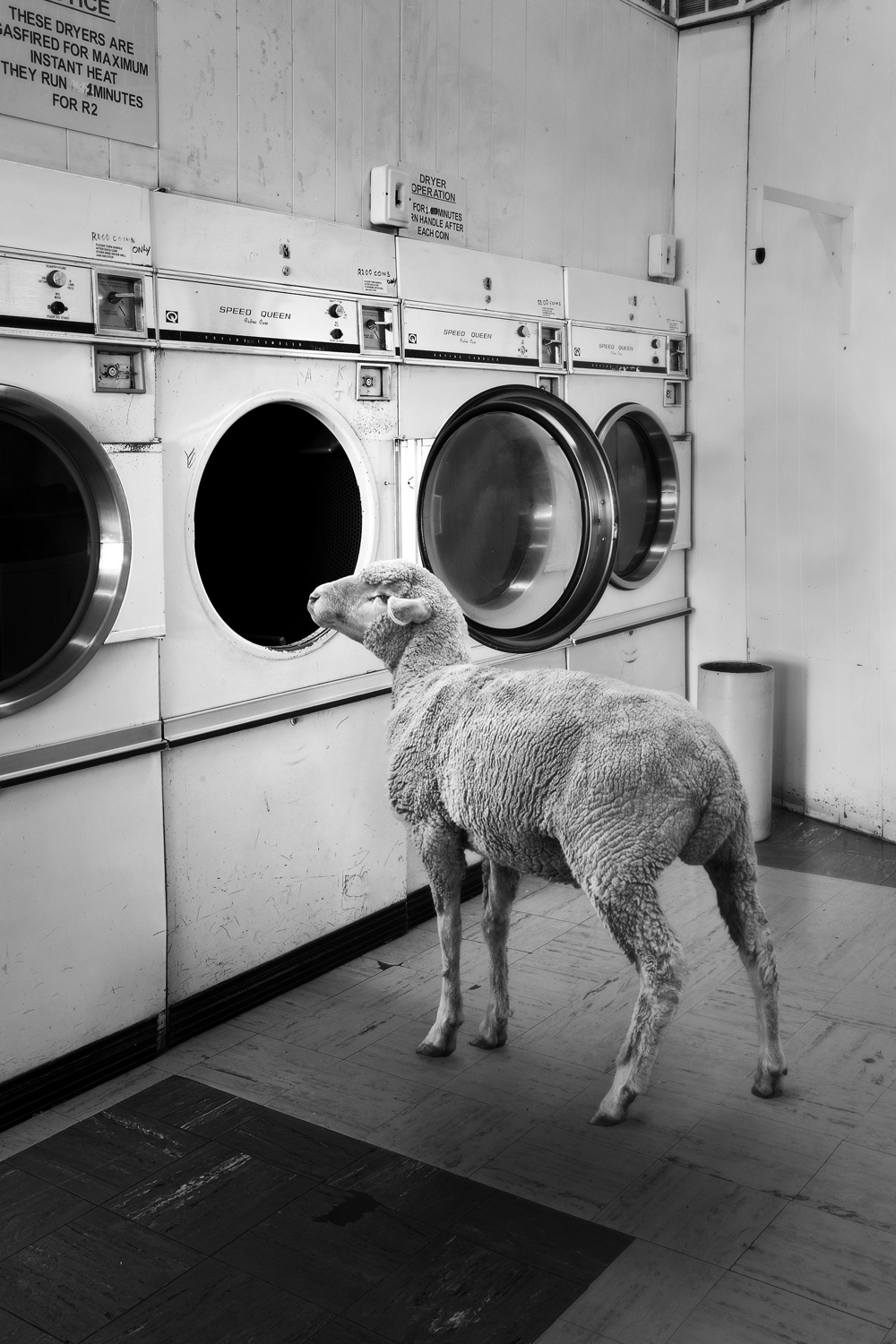 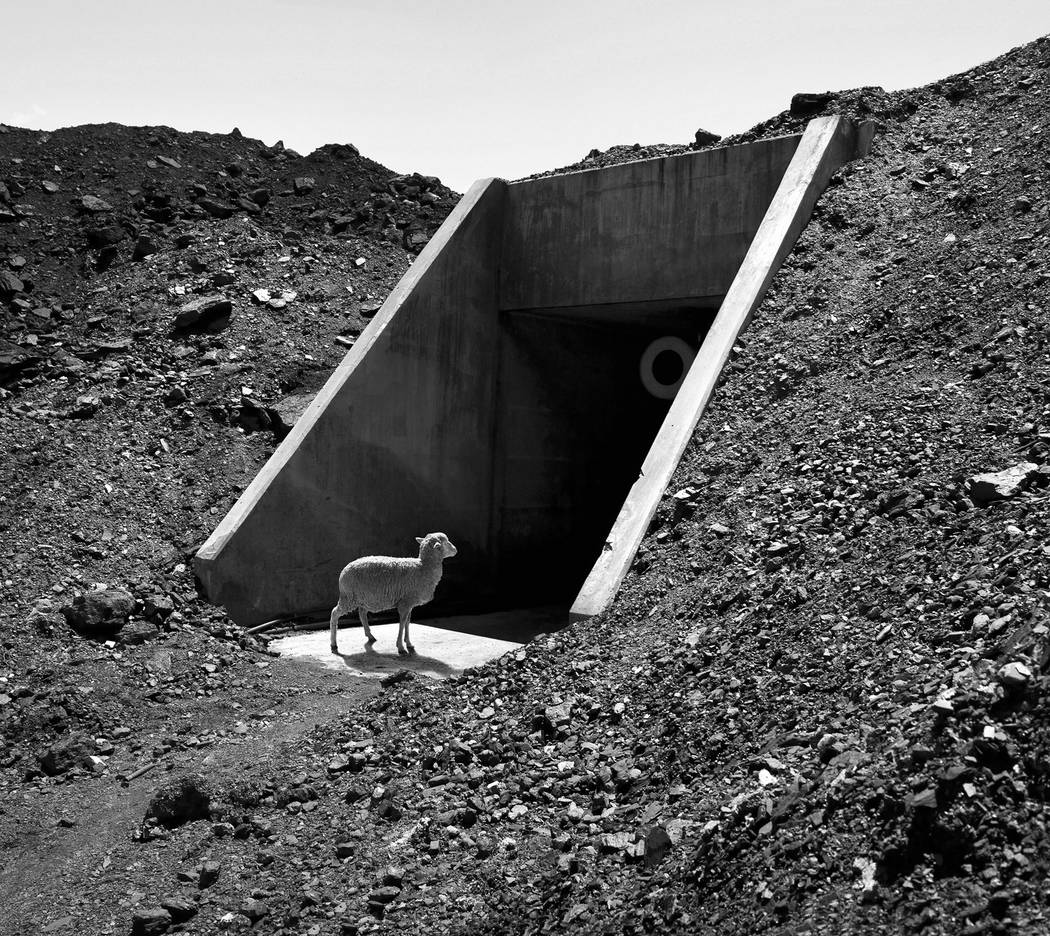 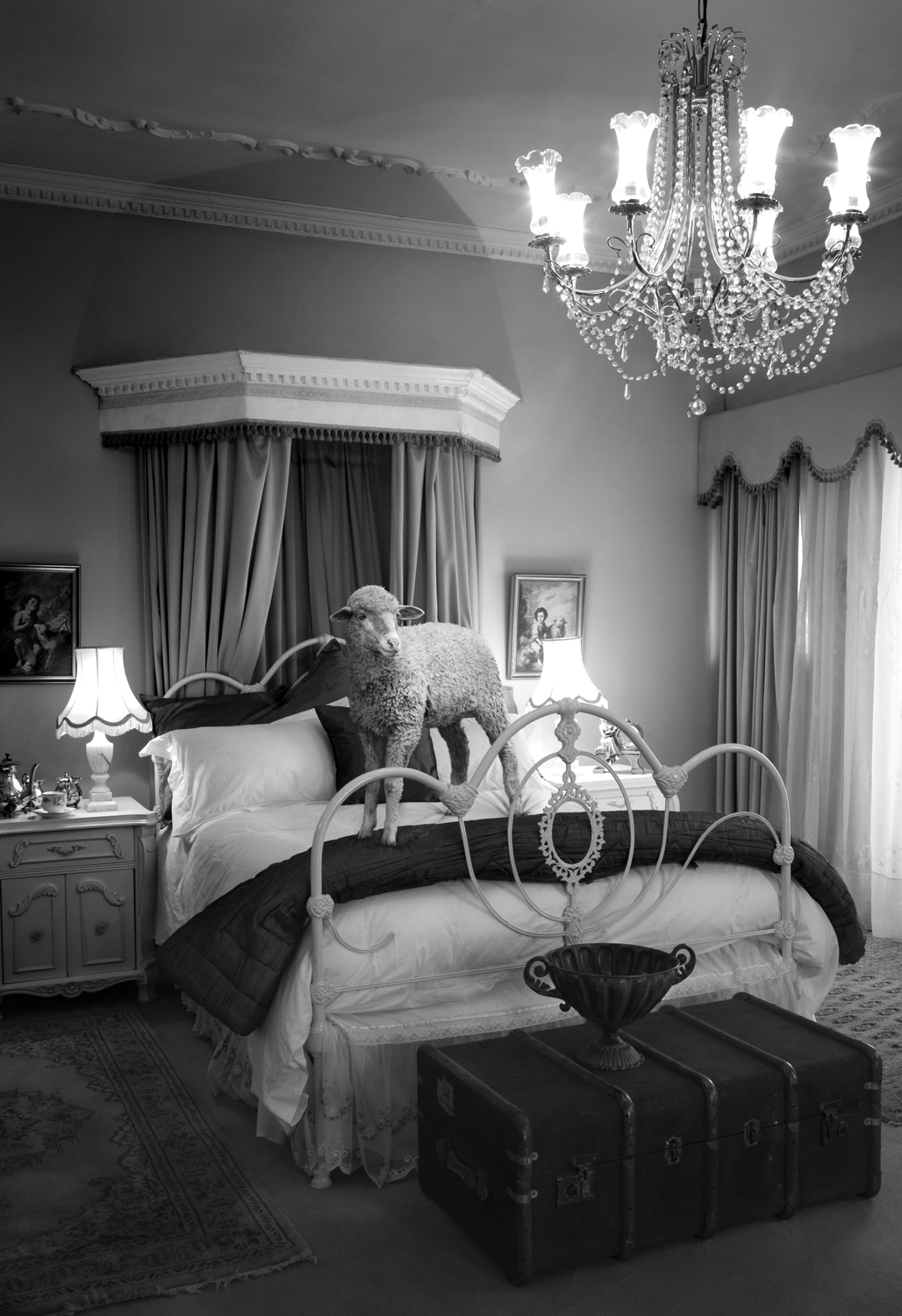 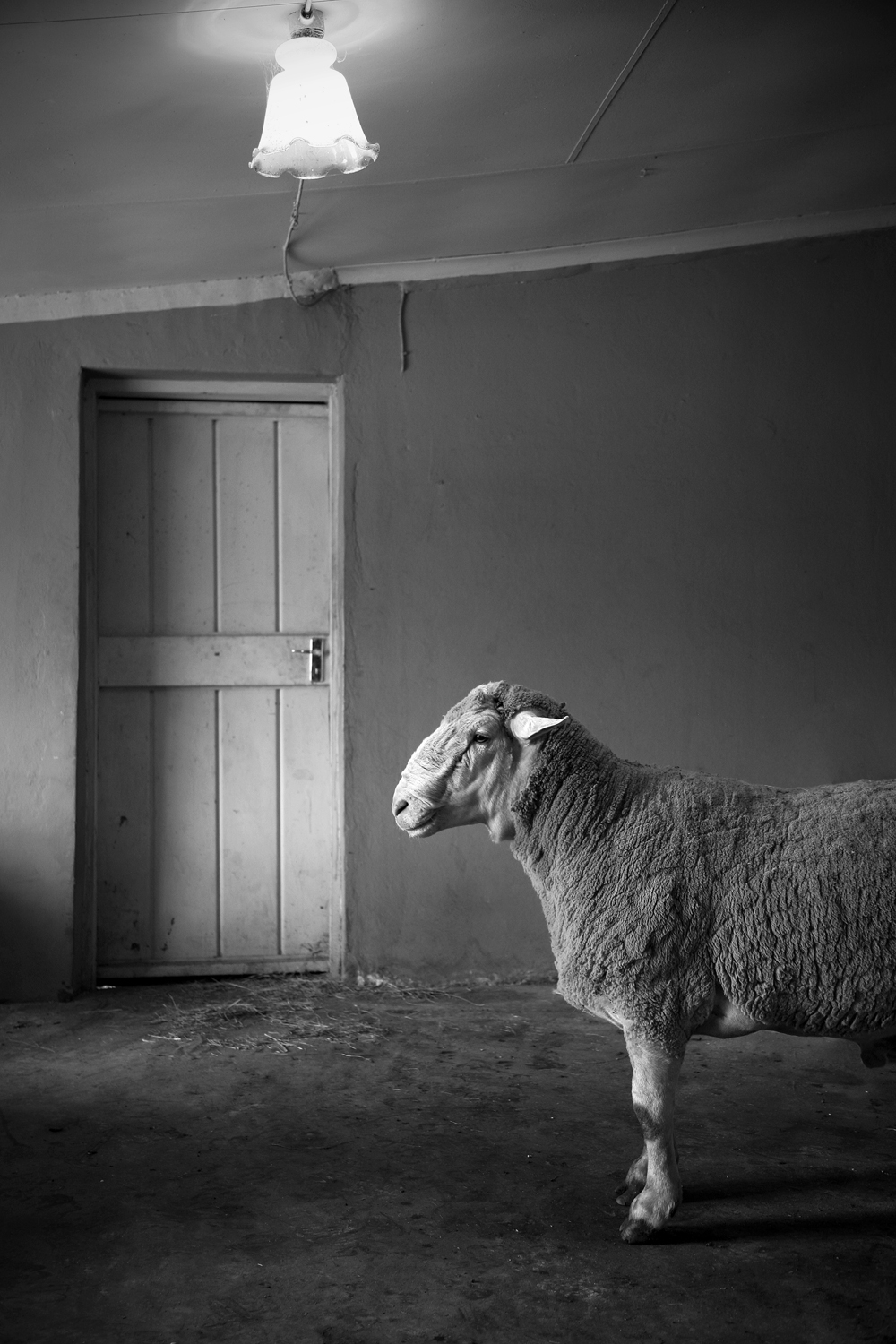 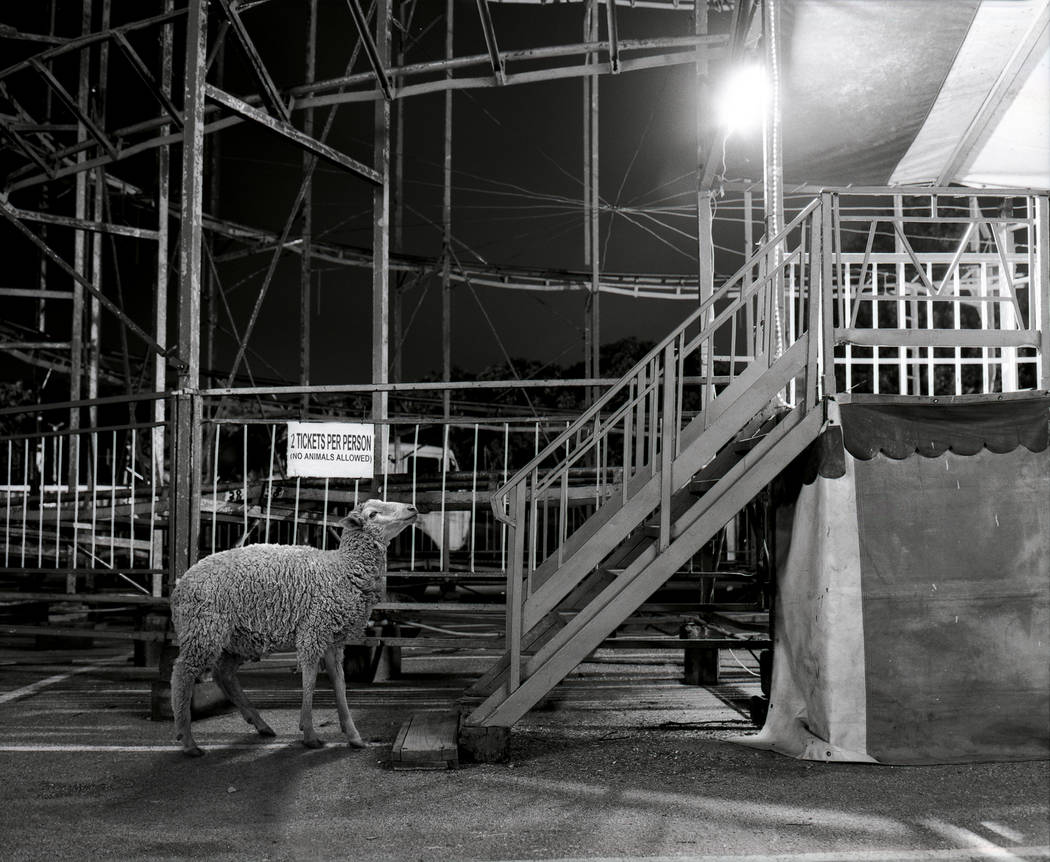 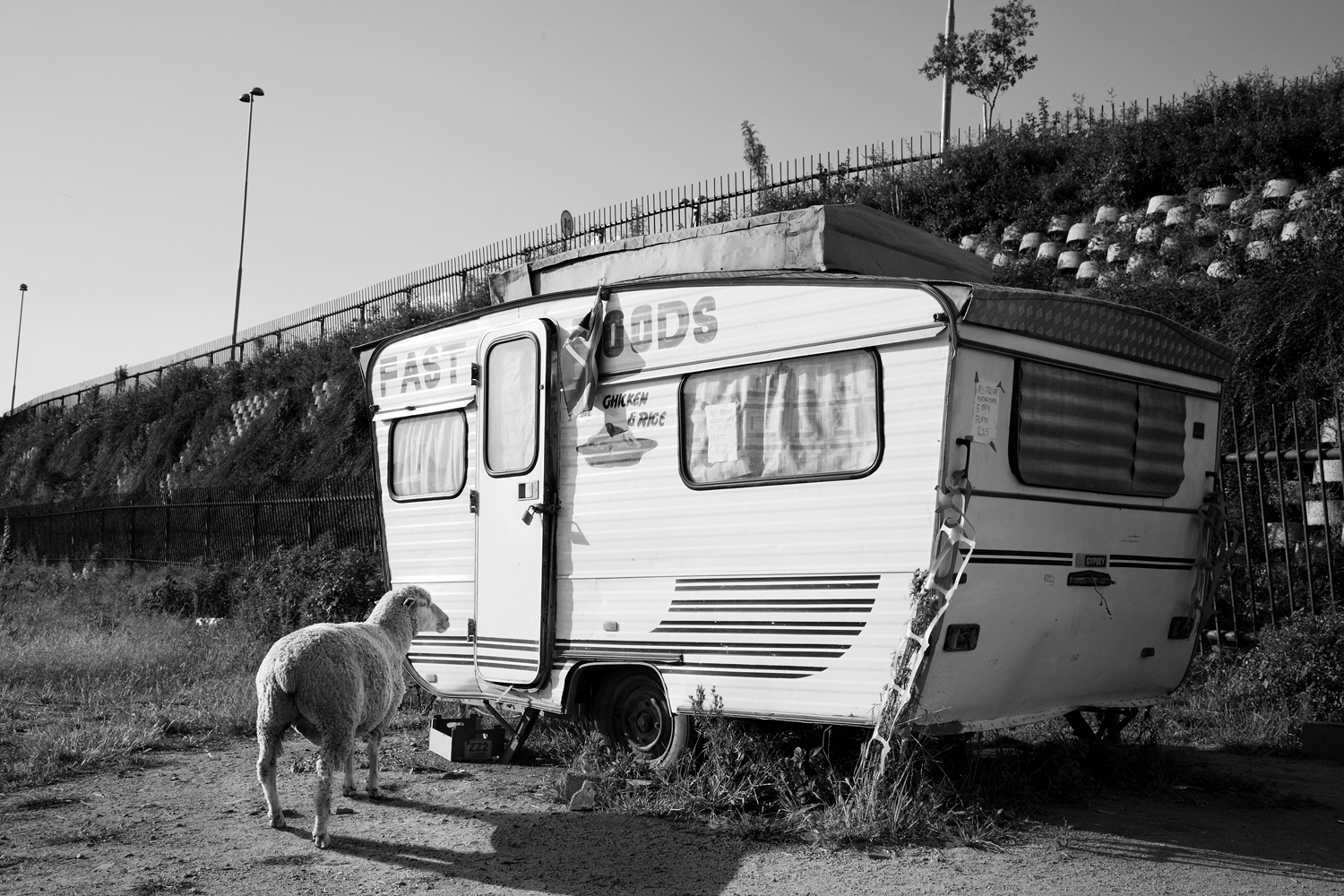 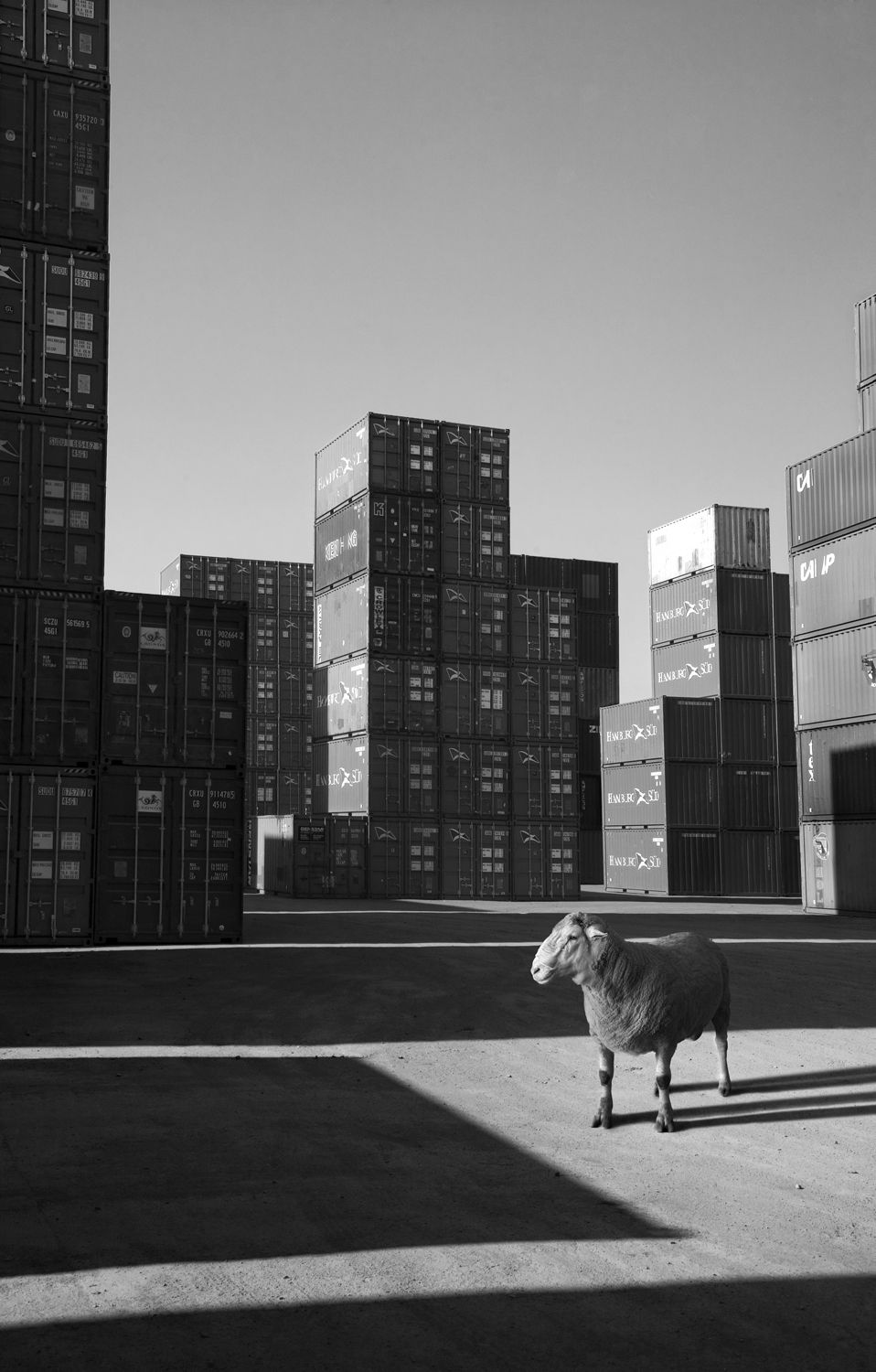 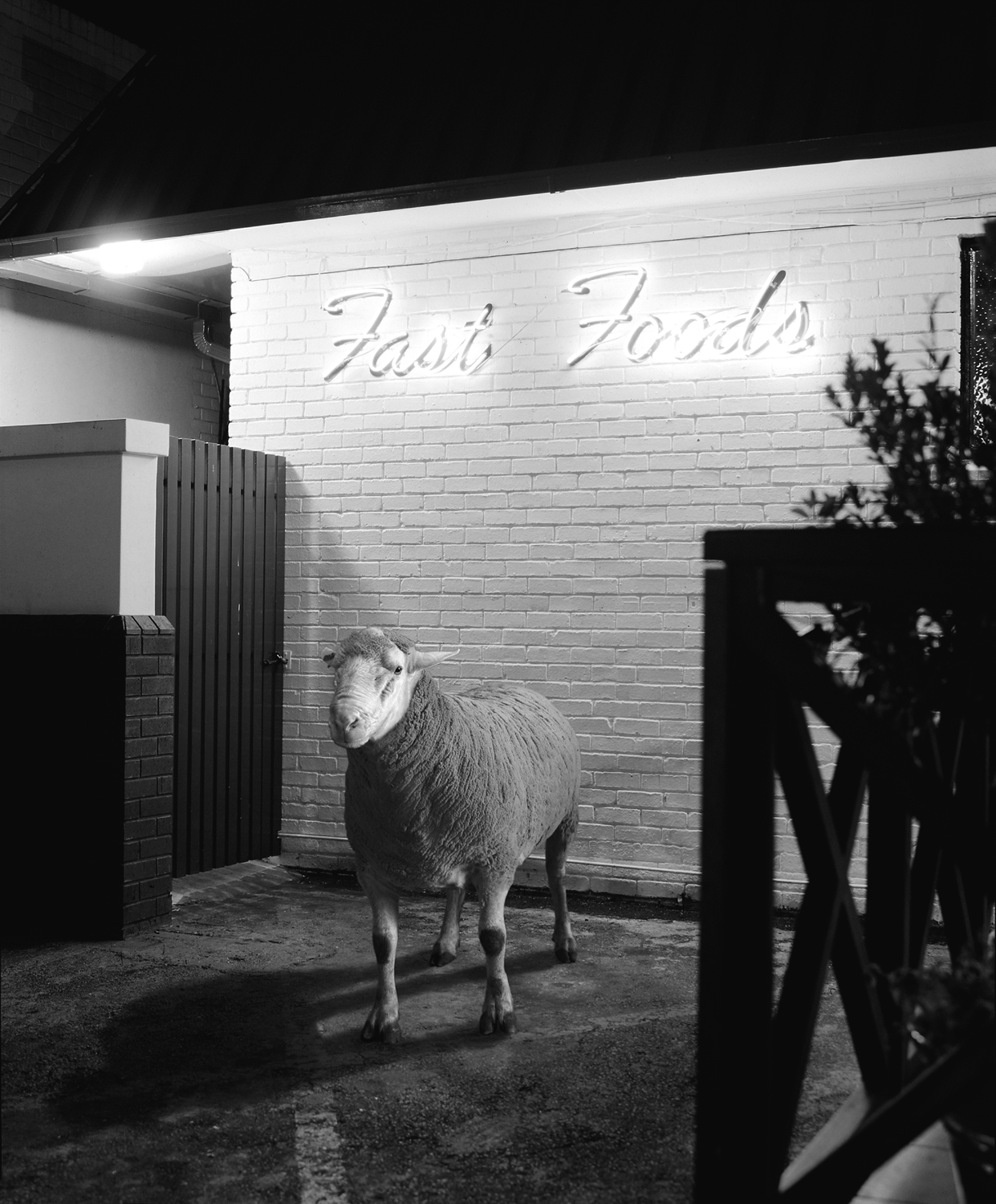 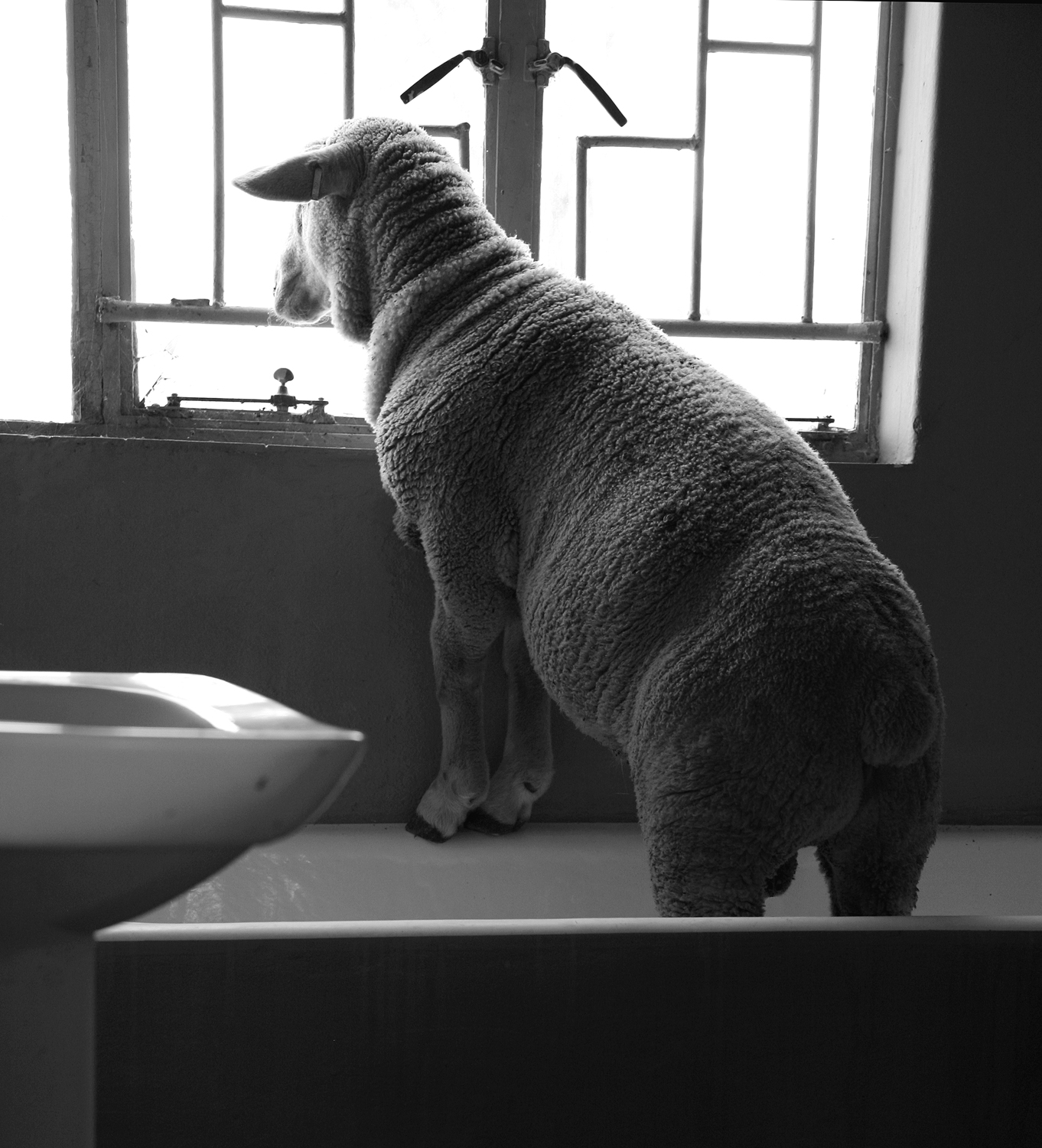 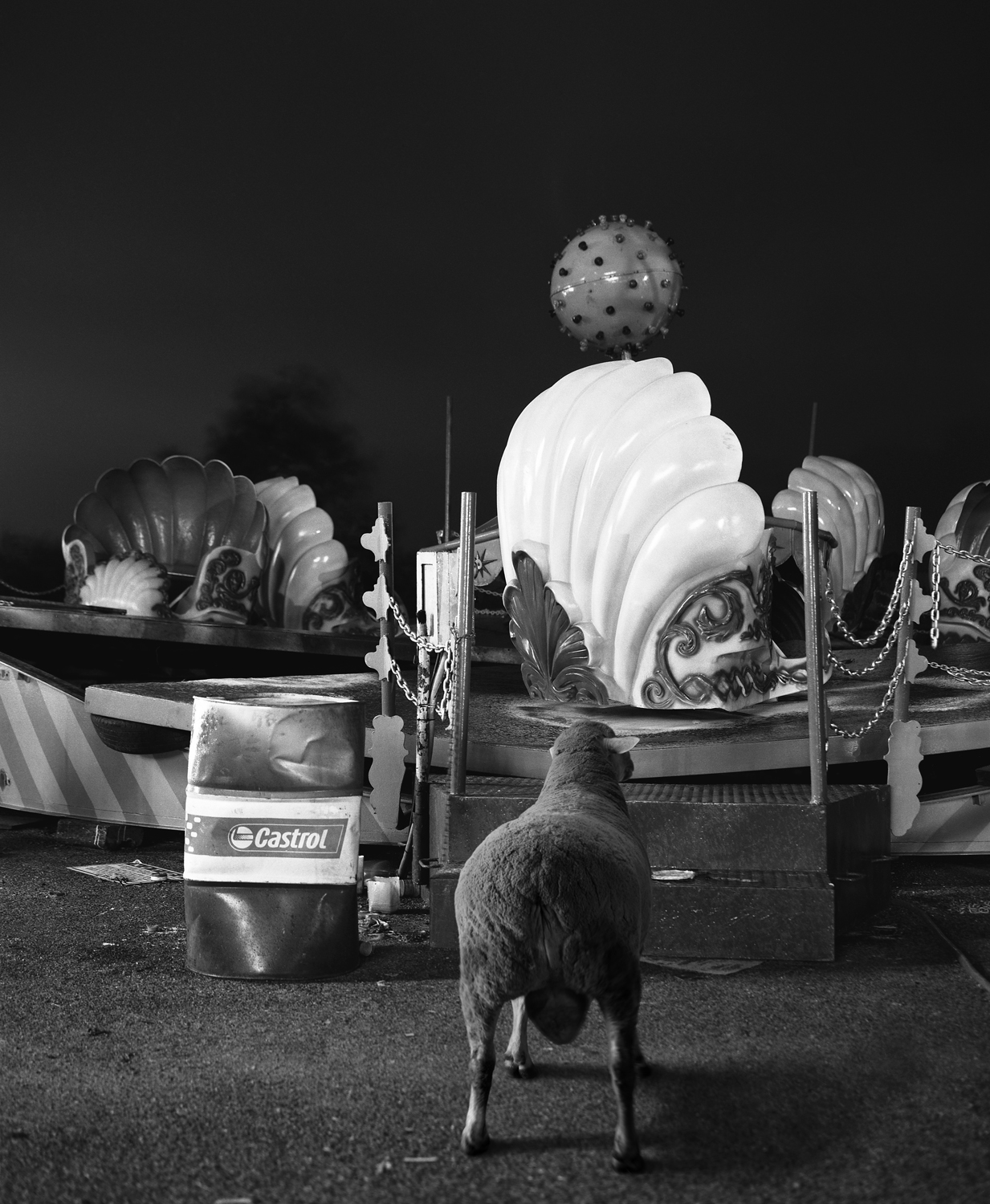 “Animals are nothing but the portrayal of our virtues and vices made manifest to our eyes, the visible reflections of our souls. God displays them to us to give us food for thought.” – Victor Hugo, Les Miserables

In contemporary art, the representation of the animal is ever-present. The relationship between man and animal is a fluid one that follows a master-slave dialectic whereby we become master over the animal due to our self-conscious ability to recognise ourselves as being self-conscious beings, therefore holding power over that which cannot distinguish itself as self-conscious.

The representation of animals in contemporary art has opened up new ways of addressing this relationship, asking us to critically address this dialectic. The face-to-face encounter between animal and human results in a gaze with the Other. This gaze gives rise to a complex exchange, dramatizing and calling into question the relationship of spectator as subject and his/her place in relation to the animal and its world. The aim of the series is to tear human perception from its home; to open up new worlds, to ‘look out’ from animality.

The series’ depiction of sheep ultimately becomes a functionary for human solipsism: mere lenses to reflect or refract images of ourselves. The series explores our relation to that which is different, exploring how we as human beings function in society. The series attempts to explain that we must be willing to take a stroll into other worlds in order to understand ourselves. The series provides a comment on the way our cultural constructions of relationships to animals (such as the master-slave dialectic) inevitably reduces us to that which we try to categorise and control as lesser than ourselves (in this case, the animal).

Justin’s work has been exhibited both locally and internationally and recently made the top 10 in one of Africa’s most prestigious art competition, the 2014 Absa L’atelier.  Justin says he is driven by a passion to explore avenues less travelled, and the desire to create images that resonate with emotion.