Review and photographs by Emil von Maltitz, a Durban-based photographer.

Along with the SIRUI travel tripod that I recently reviewed, I was also handed a SIRUI R-2204 carbon-fibre tripod to try out. However, before even starting, I have to be upfront with the fact that I lean heavily towards pro-end and pro-spec tripods. I would say that at least 90% of my landscape work is done on a tripod and far more than 50% of my commercial work is done with the camera firmly mated to a set of tripod legs and a decent ballhead. As a full disclaimer, my tripod of choice is currently an FLM CP30-L3S. That isn’t to say that I don’t think highly of SIRUI products in general. I was very impressed by their pro-spec N-3204x tripod which I used for several months and personally own and use the astoundingly small and light G20KX ballhead. But an entry level tripod? Well, the proof is in the pudding so they say…

What exactly is the R-2204 tripod? In a nutshell, this is SIRUI’s high-end entry level tripod; basically a carbon-fibre, but no frills, set of legs. What you get is a basic tripod with a rapid centre-column, 4 leg sections, a weight of 1,3kg (nice and light), a maximum extended height of just over 1,6m and a minimum height of 385mm (without the head). Packed away without an attached head the tripod comes to a relatively portable 525mm. The ‘no-frills’ is essentially the fact that the centre-column does not have a ground level kit, the legs only have two angle stops that don’t allow for a lower height than 385mm, and the tripod legs don’t fold over the head in the now much copied compact travel tripod design. As a pared down tripod though, there isn’t that much that SIRUI have pared away to be honest. 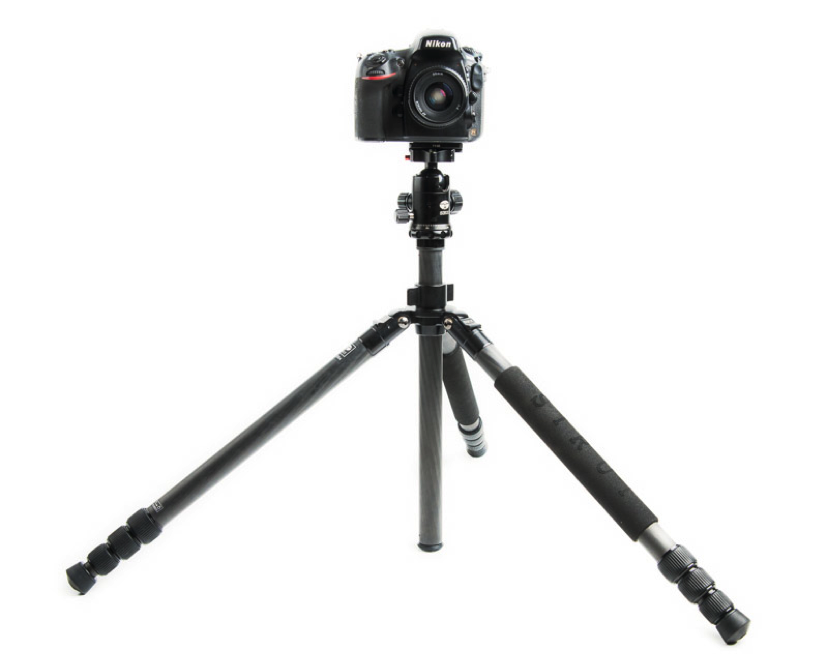 Oddly, being the cheapest of the SIRUI tripods I have reviewed to date, the R-2204 felt the sturdiest. This might just be a perception, but it felt more rugged in the hand and was certainly simpler to use than the similarly sized S-2204-N travel tripod. Like all of SIRUI’s high-end tripods, the legs are made from 8x carbon-fibre. Traditionally, tripods have been made using 6X carbon-fibre. The theory is that the 8-layer weave means for a lighter, stiffer tripod. This is a good thing. The outer weave leaves quite an attractive pattern that runs at a steep diagonal linear pattern around the legs. The metal components are made from forged metal, rather than cast metal. SIRUI claims that forged metal makes a more compact, heavier duty material that gives a better strength to weight ratio. Certainly in my experience with SIRUI gear to date, the metal components have stood up well to wear and abuse.

The maximum diameter of the top tube is 28mm, while the narrowest diameter tube is 19mm! This is quite a thin tube admittedly, but it is still thicker than the old aluminium Gitzo Reporter that I still have. Despite the relatively narrow 19mm tube diameter I didn’t feel that the R-2204 had undue flex when fully extended. SIRUI rates the tripod as being able to handle 15kg. I certainly had no problem using it with a Nikon D800 and Nikon 16-35mm lens with Lee filter attachments.

Unlike the larger SIRUI tripods, the metal shoulder of the R-2204 is somewhat smaller. The tripod is really designed to be mated to a small tripod head like the G20kx ballhead. Anything larger and the head starts to look a little unwieldy. Bear in mind this is a basic tripod, so it’s unlikely that someone who buys it is going to put something as big as an Arca-Swiss Studioball or SIRUI K-40x on top of this thing.

It sounds a little strange writing about a pared down basic tripod and then heading a section with ‘features’. Yet, the R-2204 does indeed have ‘features’. For a start, SIRUI have placed the same retractable spiked feet on the tripod as with all their other tripods. I really like these feet incidentally.  They might not have the same level of grip with the spike out as a Gitzo or FLM, but they are certainly more user-friendly (hell, if you want the same grip as the FLM tips give, simply file off the rounded tip of the SIRUI spike; be warned that this can lead to scratching floors if you ever release the spike on anything other than outside surfaces). 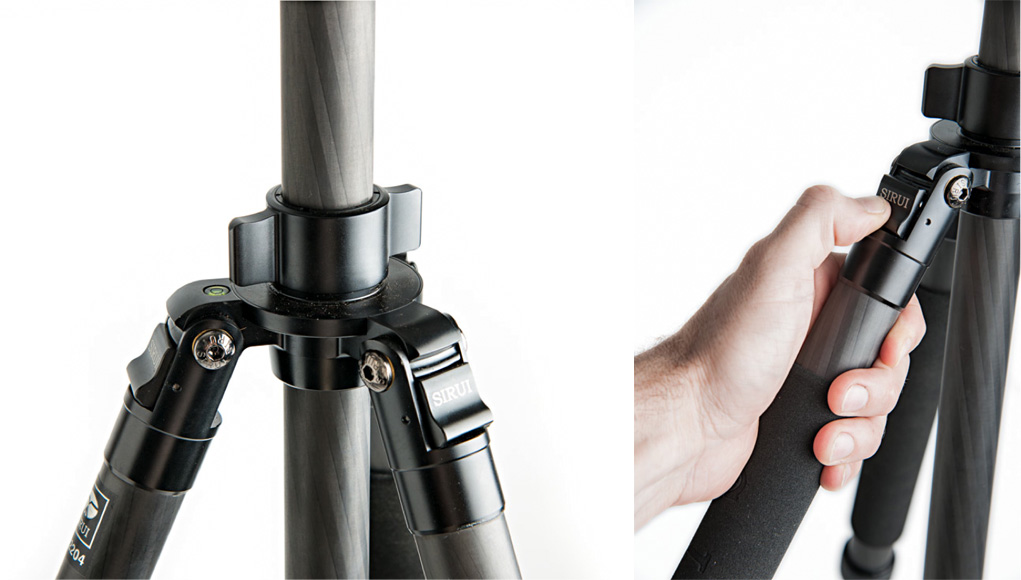 Thoughtfully, SIRUI have wrapped two of the legs in thick spongy neoprene. I have to say that I appreciate this. I often find myself working in wet or cold conditions (sometimes both together) and it really is a nice touch to grab the tripod around this foamy collar rather than on the carbon-fibre directly. A side benefit of this is the increased protection that the legs receive when you strap the tripod to a side of a backpack. It’s one of those little touches by SIRUI that demonstrate that even though you are buying what is essentially the base model of their carbon-fibre range, you are still given features that echo the top of the range equipment.

Talking of the centre-column, it has a very good retractable hook for hanging weight off the bottom of the tripod (essentially turning a small light tripod into a small, heavy and stable tripod). The centre-column is also reversible, allowing you to place your camera lower than the minimum height of 385mm above ground. This little bit annoys me though. A reversible centre-column is more of an admission of the loss of a feature – two leg angle stops rather than three – than a feature in itself. More of this in a moment though…

There is also a small bubble level in the shoulder of the tripod, making leveling relatively simple. 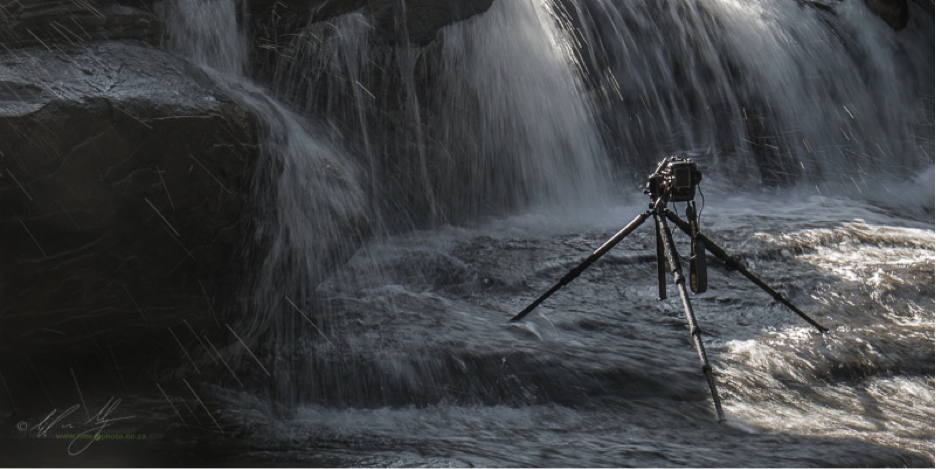 There’s lots of good news in using the R-2204. Because it’s a pared down tripod it is dirt simple to operate. The leg locks are all rubberised twist locks with a good positive locking action. The little click lock at the top of the tripod leg is easy to push in and very simple to understand – especially since there are only two angle stops. I also particularly like the locking mechanism on the centre-column which uses a butterfly lock rather than a simple rubberised tube lock. It is just that much easier to operate and lock (why can’t we have this on all the SIRUI tripods? – oh, because they fold in on themselves into the now de rigeur travel style tripod).

I felt confident using this tripod in several situations where the use of light tripods could potentially lead to vibration in the image. Careful camera and tripod technique meant that this little tripod could hold it’s own against my larger and heavier tripods. Herein lies the beauty of this tripod. It only weighs 1,3kg! Add a light but sturdy G-20KX ballhead at 0,4kg and you have a very capable sub 2kg tripod setup. If you are starting out in photography it is hard to go wrong with this kind of setup.

I mentioned above that I was happy using the tripod with a D800 and a heavy-ish lens attached. With careful use and a weight hung from the hook at the base of the centre-column you could get away with heavier rigs.

In my mind the only thing holding this tripod back from being the perfect travel companion tripod is the fact that it cannot get to ground level without reversing the centre-column. I guess it wouldn’t be a basic tripod then. Oddly, I discovered that the ground-level kit from the S-2204-N actually fits the R-2204 and, but for the lack of a third angle-stop to get lower, would make perfect sense. The S-2204-N travel tripod can go down to ground level though.

So for some the toss-up is between the S-2204-N and the R-2204. They are similarly sized, with similar weights and similar specs. The one is a little more complicated to operate but is arguably more fully featured, while the other is easier to operate, lacks some features, but gives an extra 10cm or so of height. I preferred the ability of the S-2204-N to get it’s legs almost all the way to 90 degrees from the centre-column, but preferred the stability and rigidity, not to mention the extra height, of the R-2204. It really is a toss-up.

As a basic tripod the SIRUI R-2204 is probably one of the best ‘basic’ models I have ever come across. It is because it is so good that I keep thinking there should be more. It feels and works like a far more professionally oriented tripod, so I grouch and gripe when it doesn’t have those features. The reality is that to get those features, the photographer has to spend a lot more money. Thrown into the package are the usual excellent tripod bag, strap and two allan keys for adjustment. 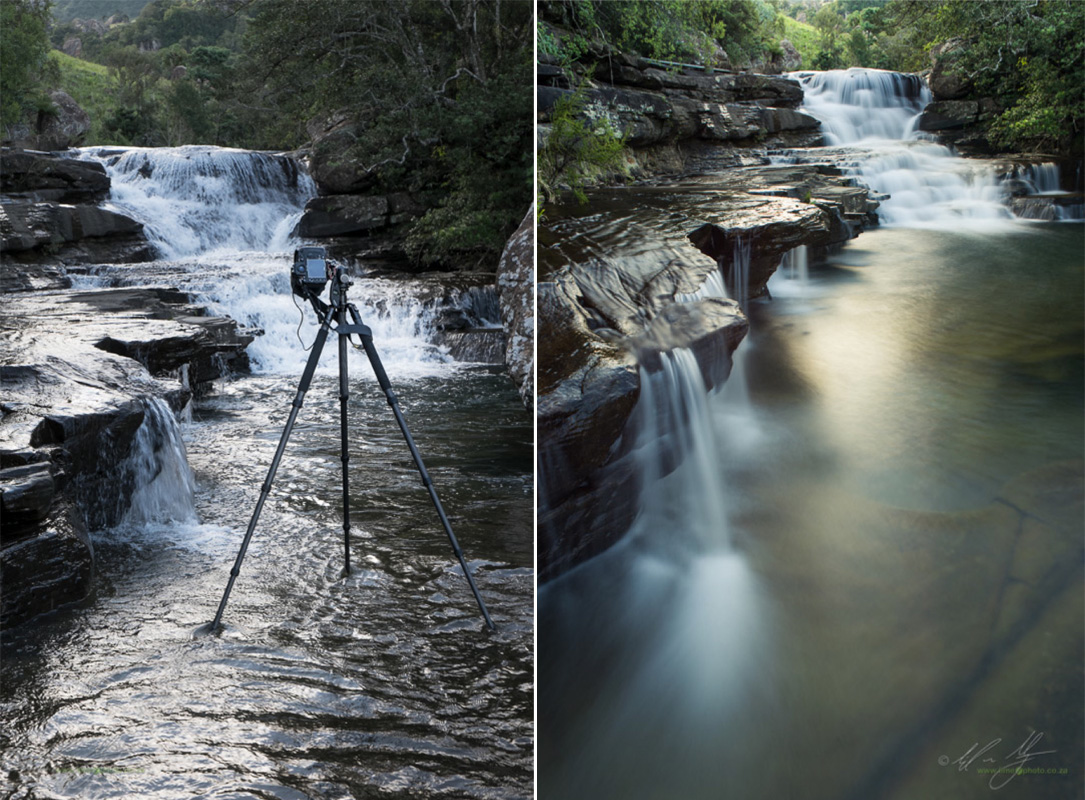 My final thoughts on the R-2204 are pretty simply that I liked the tripod. Starting out, it’s a darn sight better than what I started with when I entered into photography. It’s light, capable and simple to operate. It’s easy enough to use and light enough to carry with you on pretty much any photo-shoot and strong enough that it’ll last for years, if not decades, of abuse. It doesn’t compete with the likes of the SIRUI N-3204x or the FLM CP30-L3S because it was never meant to. If you need a big, heavy tripod, then you buy a big, heavy tripod. The R-2204 is for the photographer who needs a basic all-round tripod without breaking the bank (or the back). The R-2204 delivers.

This post will be updated with the availability and pricing information as soon as it’s been loaded on Orms Direct.