Click through for details about the Cape Town premiere of The Bang Bang Club, and book tickets for the early screening.

The Orms Connect Team was fortunate enough to attend the Cape Town Premiere of The Bang Bang Club on Tuesday 19 July, before the film’s nationwide release on Friday 22 July.

The Bang Bang Club follows the lives of four South African combat photographers as they documented the township violence that occurred prior to the general democratic elections in 1994. The film is an adaptation of the book that shares the same title, that was written by two of the photographers, Greg Marinovich and Joao Silva.

Their story tells of events that most South Africans knew nothing of due to the blatant censorship of the media by the government of the time. Their photographs gained international acclaim, with two of the photographers being awarded Pulitzer Prizes.

The director, Steven Silver (documentary film maker), successfully transfers the documentary style employed by the photographers into the cinematography of the film itself. This is a must-see for any South African, and even more for anyone interested in photography.

The film is currently being screened at all major cinemas in South Africa.

Update Wednesday 13 July 5:28PM
Ogilvy has informed us that the 8:30PM screening has sold out, but that they are now planning an earlier 6:15PM screening due to the popular demand, so be sure to contact them and book your tickets!

Ogilvy has organised a charity event for the Cape Town premiere of The Bang Bang Club.

The Bang Bang Club, starring Ryan Phillippe and Malin Akerman, is based on the auto-biography of the same name, written by South African combat photographers Greg Marinovich and Joao Silva. Filmed on location in Johannesburg, the film is bound to be a massive box-office hit when it is released in local cinemas on Friday the 22nd of July. For those of you that can’t wait, the premiere will be screened next Tuesday, the 19th of July, at the Labia Theatre in Orange St. Tickets cost R50, and all proceeds will go to Percy Bartley House, an all-boys home in Woodstock. Contact Victoria at Ogilvy to book your seats for what’s bound to be an amazing experience. 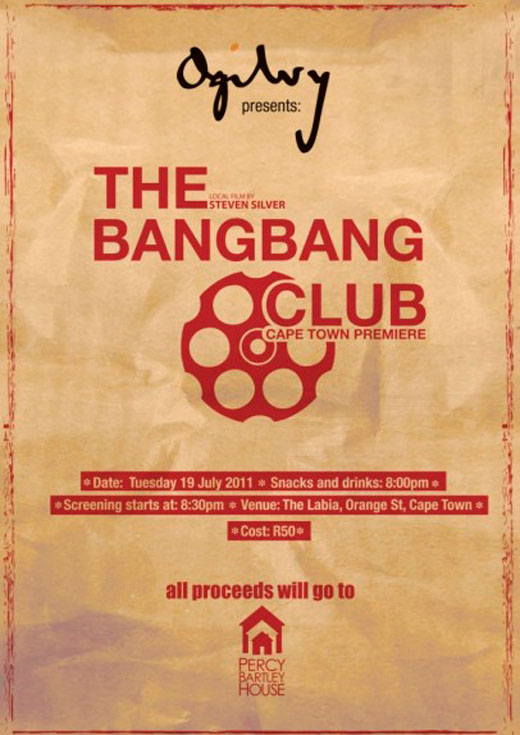