The Evening Standard has posted a fascinating article, which looks at the people present in this powerful crime photograph.

A photograph taken at a carnival in Notting Hill, London, on 29 August this year has been circulating around the Internet and in newspapers ever since. The picture, taken by Getty photographer Oli Scarff, depicts a man running away from a near-fatal stabbing. Another man, dubbed “the hero”, is attempting to trip the attacker while blood starts seeping through the victim’s shirt, pictured in the background. Also in the picture is a police officer from Wales, in town for a conference, seemingly not taking any action. The powerful photograph helped to identify the attacker, whom has subsequently been sentenced to four and a half years in jail.

The Evening Standard has posted a fascinating article, which looks at the people present in the photograph, and shares the policeman’s story for the first time. It’s an interesting analysis of the story behind a photograph, and points out how important the medium of photography is, even in the age of HD video.

Read the article here: Fallout from a photograph that shocked London.

Click on the image below for a larger preview: 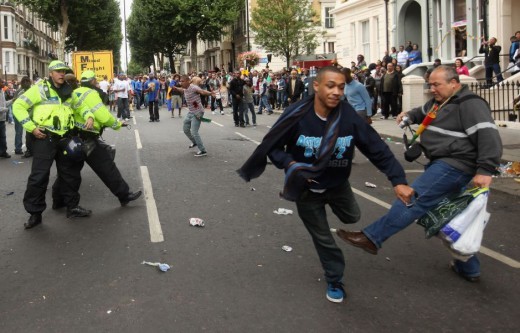