Postcards from the Road is an exhibition featuring works from South African travel photojournalists Justin Fox and Don Pinnock.

Update:
Photographs from the exhibition opening has been added to the post, scroll down to view them. The presentation of the works in large postcard format is very interesting, and well worth checking out – swing past the exhibition, which is open till 3 December, if you’re in the Southern Suburbs.

Postcards from the Road is an exhibition featuring a selection of works from South African travel photojournalists Justin Fox and Don Pinnock. The photographs will be represented as large postcards, featuring the photographers’ writing as well, and will be opening this Thursday, 27 October 2011 at David Krut Projects.

Justin and Don have both been photographing their travels for Getaway magazine over the last ten years, and have produced a large collection of work during that time. The curators looked at their extensive portfolios from a fine-art perspective and selected 14 works each. The combination of image and text on show actually derives from a very interesting Surrealist process – be sure to read more about it in the exhibition overview, posted below.

The exhibition will open at 6PM on 27 October and be on show till 3 December 2011 at David Krut Projects in Newlands, Cape Town. We’ll be attending and will update the post with some photographs of the event. The exhibition was printed by Lauren Smit at Orms Prophoto Lab. 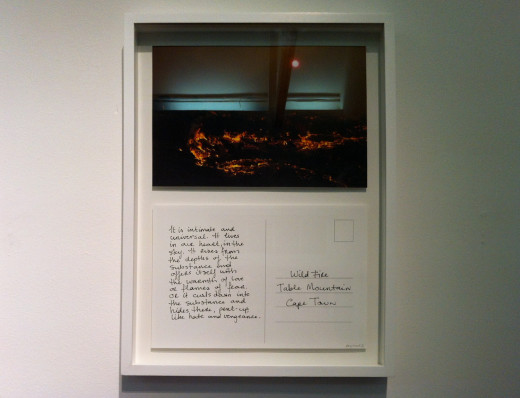 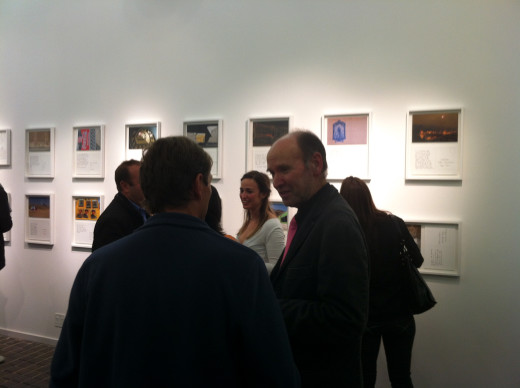 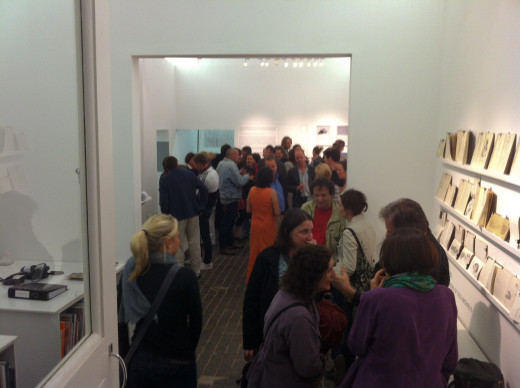 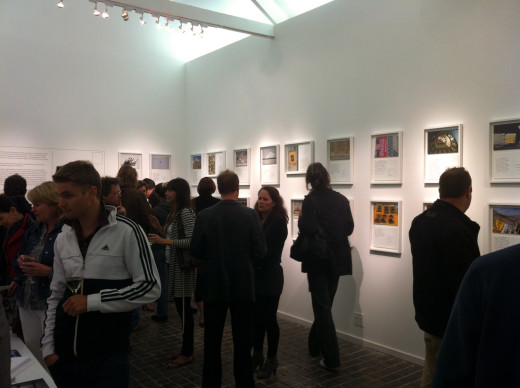 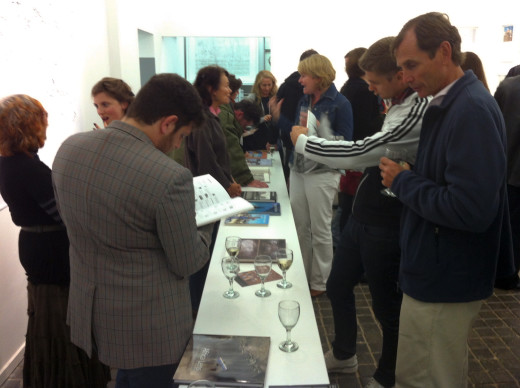 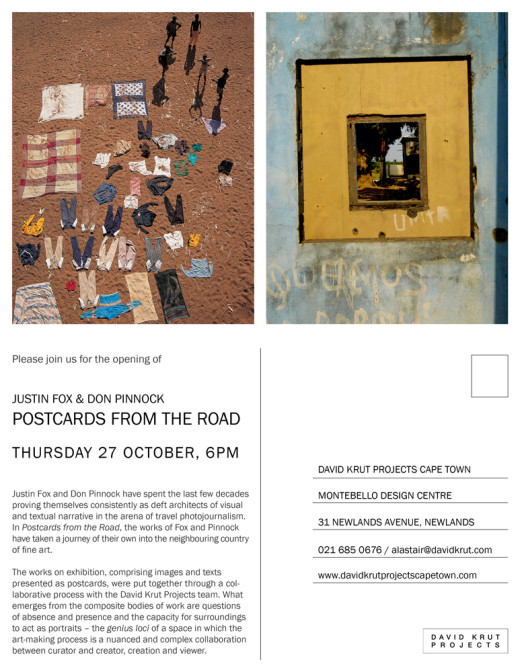 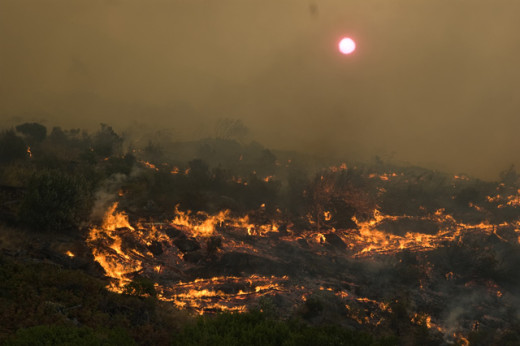 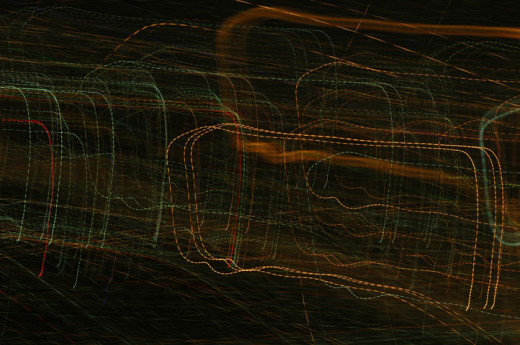 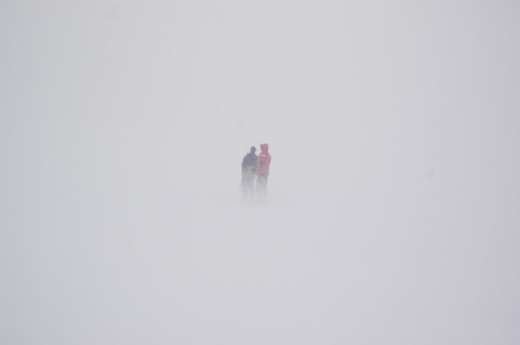 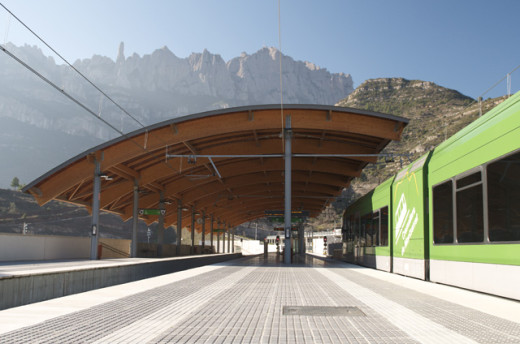 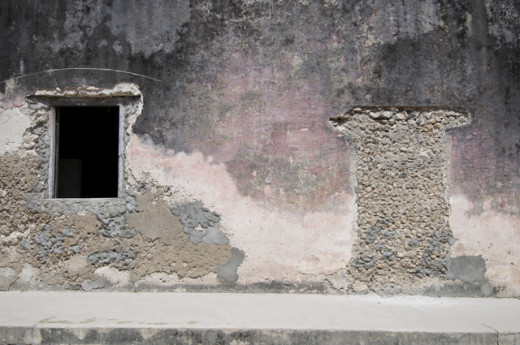 Postcards from the Road showing at David Krut Projects Cape Town from 15 October – 3 December 2011, is an exhibition of works by renowned photo-journalists, Justin Fox and Don Pinnock, re-imagined for presentation in a fine art context. Taking the form of postcards, in which image and text work in juxtaposition, the works form a narrative of the places to which the photojournalists have travelled and the different ways in which these journeys can be seen.

At the age of 12, Justin Fox picked up his first Nikon camera with the aim of documenting a family trip to Europe. Thus, he started down the road of capturing travel in photographs and writing, seeking always to portray the genius loci, the spirit of place. In a parallel universe, Don Pinnock emerged from the 1980s in South Africa, exhausted by political tumult and gritty social realism, and chose the different path of travel photojournalism, as a balm for his burnt-out soul. Also armed with a Nikon, he went out and discovered the beauty of a continent in which he was close to losing hope.

Their paths crossed at Getaway magazine, where both photographers have worked for a decade or so, and in their work for the publication and otherwise they have developed reputations for themselves as remarkable architects of visual narratives in the particular forum of travel journalism.

Both Fox and Pinnock are writers as much as they are photographers, their linguistic narratives holding an equally significant place alongside their visual languages. As Pinnock has put it, they ‘write with imagery and photograph with syntax and description.’

In Postcards from the Road, the works of Fox and Pinnock have taken a journey of their own, from their home in travel photojournalism into the neighbouring country of fine art.

The exhibition has been put together through a collaborative process derived from the old parlour game, Consequences, that was adapted in the early 20th century by the Surrealists into what is now known as cadavre exquis or the Exquisite Corpse. The game, played by several people, entails writing down a portion of a sentence on a sheet of paper, folding over the words and passing it on to the next person for their contribution. So delighted with the extraordinary sentences that occurred – one of which has given the exercise its name – Breton and crew reformed the game for drawing: the first collaborator draws the head of a figure, folds the paper over so that only the last piece of his drawing is visible and passes on to the next player for the contribution of torso, and so on. The game, which began as pure entertainment in the whiling away of evenings at 54 rue du Chateau, developed for the Surrealists into the metaphorical expression of Lautréamont’s proposition that “poetry must be made by all and not by one.” It has also been appropriated by contemporary thinkers, in response to our increasingly fractured and borderless world, as a way of “scrambling subjectivity to let the unconscious methods we’ve used to sort out information become a filter for the way we engage the external world.”

For this exhibition, we have adopted the method of the Exquisite Corpse as a way of re-presenting the works of Fox and Pinnock in a context and to an audience that the photographers did not have in mind when shooting. Ways of looking at travel photojournalism and ways of looking at fine art photography differ – the thought processes and intentions behind the two have been developed out of diverse histories and frameworks. Hence, the itinerary for the journey of the works (and the collaborators) has been:

Archives of thousands of images taken by Fox and Pinnock over their years of working were handed over to the David Krut Projects team. The team then made a selection of fourteen images from each photographer’s archive. The selection process was based on an instinctual response formed out of collective years of working within a fine art context. The selection was then handed back over to the photographers who responded in writing out of their years of experience as travel photojournalists to an assortment of images that might at first have been quite unexpected or dislocated.

What has resulted is a collection of works, presented as postcards – correspondence from the journeys of the photographers, but also a document of the collaborative journey undertaken – in which image and text work in conjunction with each other. The links between the images and the words are not always immediately apparent. The links between the images in the collection are equally obscure at times.

However, in releasing the images from their original objectives and distancing the image-makers (and the audience) from their subjects, what begins to emerge from the composite bodies of work are fascinating conversations engaging with questions of absence and presence and the capacity for surroundings to act as portraits – the genius loci of a space in which the art-making process is a nuanced and complex collaboration between creator, creation and the onlooker.