Are you an avid live music photographer? Would you like a Photographer’s Pass to one of the premier music festivals in South Africa?

Update 15 November 2011 08:30AM
The competition is now closed! Thank you for all the entries – we’ve received some awesome photos! Judging will commence today, and the top 10 finalists will hopefully be posted on Wednesday or Thursday. Good luck!

Are you an avid live music photographer? Would you like a Photographer’s Pass to one of the premier music festivals in South Africa? If so, read on…

Orms and Synergy Live Music Festival are hosting a Live Music Photography competition in collaboration with one small seed. The competition aims to identify and give exposure to young photographers in South Africa with a passion for live music photography.

The competition will consist of two rounds, with the second round taking place at Synergy Live Music Festival from 25 to 27 November 2011 at Boschendal Wine Estate.

In the first round, entrants will submit their best live music photograph to competition@ormsconnect.co.za. Submissions will open on 17 October 2011, and close on 14 November 2011. Only one photograph is allowed per entrant, so only your best photograph will do.

The panel of judges will select the 10 best images to be displayed on Orms Connect, where users will vote for their favourite photograph in the comments section. The three entrants with the highest amount of votes will each receive a double-ticket to Synergy Live, as well as an official Photographers Pass for the event. This will give them access to the pit in front of the main stage.

After the festival, each photographer will have three days in which to submit their best three photographs taken at Synergy Live Music Festival. The competition panel will select the best picture from the 9 submitted images to declare a winner. The winning photographer will receive an 8 week Social Documentary Course from the Cape Town School of Photography, an A2 mounted print of the winning photograph, as well as a double-ticket to Synergy 2012!

Terms & Conditions:
• The competition is open to South African residents only.
• Only one vote per user will be counted.
• Winners of the first round will have to cover their own travel costs.
• Only one image per entrant is allowed for Round 1.
• Prizes are non-transferable.
• In the event that a first round winner is unable to attend the festival, another entrant will be selected.
• Entries close on 14 November 2011.
Decisions by the competition judging panel are final. 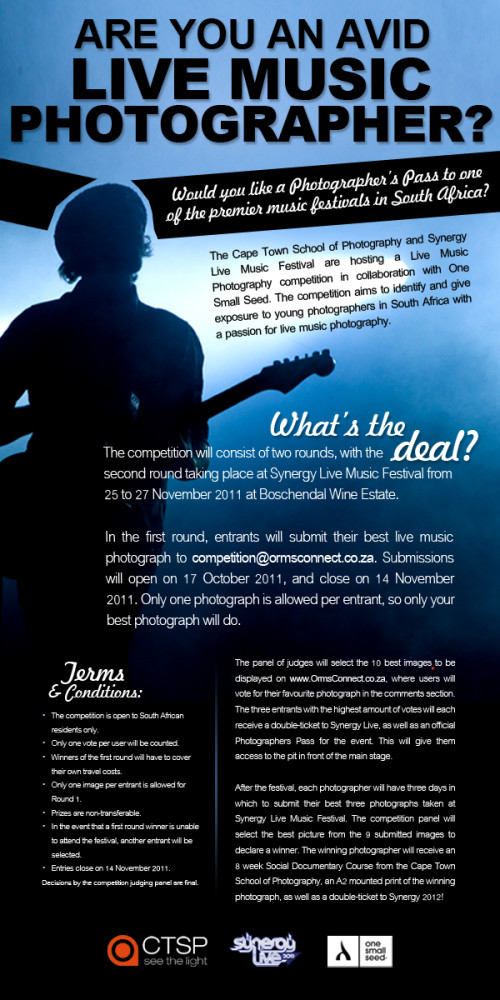 When the compass points to the weekend, it doesn't

A portrait is far more than just a photograph of a

Daylight delights. Thanks for warming up our Wedn

Stellar scenes on show at Rockwood Farm. Shot by

Dreaming of lazy days at the Dud with @airrealview

Cape Point perspective. Anyone else struggling to