World of Heroes has announced an awesome new GoPro video competition – Stand a chance of winning gear worth R30,000!

To enter the competition, you need to edit your existing footage or shoot new footage and edit it to the music of GoodLuck’s new single, Trickery. The winning entry will walk away with prizes valued at R30,000 – so there’s a lot up for grabs!

World of Heroes released this great video as inspiration:

You can enter the competition on the World of Heroes Facebook page: GoodLuck Trickery Video Competition.

If you don’t have a GoPro already, view the range of GoPro cameras available on Orms Direct.

More information and T&Cs from World of Heroes:

Edit your best video shot on a GoPro to the new track from GoodLuck and you can win prizes to the value of R30 000. We want you to film your most exciting adventures and cut the video to GoodLuck’s new single: Trickery, upload it to YouTube or Vimeo and the best video wins. Get your friends to vote and share because that will have an impact on the result. It could be you and your mates losing their minds at Tomorrowland, or your son skydiving, a POV of you in the barrel or pulling off a double back flip on your BMX. Edit like mad and do what ever you can to make your video as awesome as possible. Just don’t injure yourself attempting something stupid. We want HEROES not idiots.

Movies entered must be 100% shot on GoPro cameras.
Videos must use the song Trickery by GoodLuck available here: https://soundcloud.com/goodlucklive/t…
Movies must be uploaded to YouTube or Vimeo and the link entered in the relevant field when you submit your entry.
Movies must be of a visual content that is publicly acceptable i.e. any action sport, festival you went to, event you participated in etc
Movies must be uploaded in 720p or higher resolution.
Your movie will be judged on: editing to music, creativity, use of camera, composition of shots, style of movie, originality
You may use a part of the song or the whole song but keep us entertained and enthralled during the whole movie.
Entries close on 28 Febuary 2014 at 5pm.
Entries advancing to the second round will be announced latest 4 March 2014.

Please note: The competition is run by World of Heroes. We are only sharing the competition on Orms Connect to create awareness for their great contest. Click on the image below for more details. 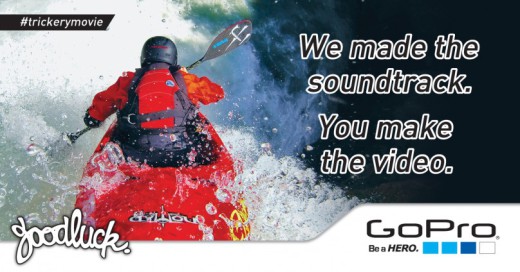